Easter is a tough one on the other side of the hemisphere.

It's not springtime.  There's no dull, grey coldness to revive from.  We've been swimming every weekend.


It's so secular that people proudly tell us about the Australian tradition of fish and chips on Good Friday without any idea of how that came about.  Fish on Fridays during Lent ring a bell with anyone else out there?  Anyone?  Anyone?

Never mind.  Here the Easter Bilby is beginning to take over from the Easter Bunny who is an introduced and environmentally destructive pest species, overbreeding and overeating at the expense of native animals.

It's nice that Australia is getting her own traditions.  But Jesus rising from the dead?  Not a particulary Australian concept.  Except, quite possibly, for the hoard of Jehovah's Witnesses canvassing the neighbourhood yesterday with their families.

Not making the whole Easter miracle all that appealing.

Except for the kids getting dragged around by their parents proselytising, poor things, instead of eating chocolate Easter eggs, Easter isn't particularly about family either.

It's about the last weekend of camping, boating and drinking, not necessarily in that order, before winter makes the water too cold to swim in comfortablw.  Which is about as cold as the water is in Europe in the summertime, but let's not go there.

The four day Easter weekend - from Good Friday through Easter Monday - has traffic like Thanksgiving in the USA, drunk driving like New Year's everywhere and the general holiday feeling like a mix of July Fourth (because it's summer and beach weather) and Labor Day (because it's the last big bang before winter) and maybe some May 1 thrown in.


It's a huge deal.  And it's loads of fun.  Australians take any holiday and turn it into a massive nationwide excuse to drink and party for as long as possible.  Quiet day at church and maybe an Easter egg hunt for the Americans?  We don't even get Monday off!  Not good enough for the Aussies.  Not only do they take four days but in Queensland our school calendar also give us the following two weeks off as autumn break.


It's parties and beach and amusement and water parks and camping and boating and yes, this is where there actually is SHRIMP ON THE BARBIE!  Only we call them prawns.

It's awesome and it's entirely Australian.  I love it.


Only I do miss the thrill of springtime just around the corner, the clear sun and the crisp air promising better weather to come.

And just one day at home with family, doing simple things, like walking in the park (all good Germans walk on Sundays, but especially on Easter Sunday), the new Easter outfits and a formal mealtime with family and close friends.  (In the USA its the only time we eat lamb!)


A German - and our American Easter was very German too -  is so stiff compared to the frolic of an Australian Easter.

But it was always my favourite holiday, a time when we remembered tradition, and looked forward to spring. 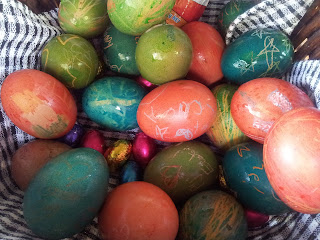 So that as we dyed Easter eggs yesterday, using regular food dye and wax crayons since there are no Easter egg dying kits here, I loved that my kids found the same thrill in colouring their own eggs and the same family closeness in preparing for the big day.


I love that we still ended up with that one ugly egg that no amount of effort could save.

And I love that, this morning, we still have that one egg out in the backyard that noone is able to find.


The sun is out.  The twins are swimming in the pool.  We had pancakes for breakfast.  (Leaving 22 minus 1 hardboiled eggs in the refrigerator for some egg salad sandwiches later.  And the day after that.)  Ryan and Andrew are playing X-Box.


During the next two weeks we are going to the water park, amusement park, beach and camping and boating.  (It's the best holiday Australia's got as well, just different from the one I grew up with.) 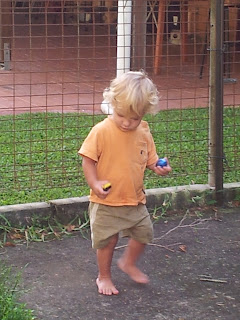 But it's sure good to know we will have that one egg rotting out in the backyard when we return!