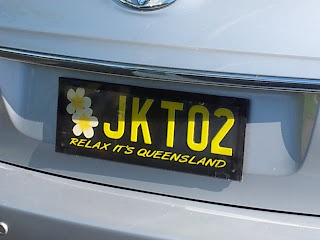 I'm trying to get to my whinges about Queenslanders, I really am.

But they make it really hard.

Look, there's a heap of stuff - besides the word heap - that starts to get to you after a while.  Mostly the total lack of planning and doing everything the last minute.  They just don't worry about ANYTHING!

If Jamaica is ' no problem' , Queensland is 'no worries, mate.'

They even have a license plate to remind me when I start to get tense about, well about all their relaxing!

The birthday party fiascos are unreal here.  You go or you don't .  Some show and some won't.  You never know.  In Germany we sent and accepted invites with military precision, showed up on time, on the dot, dropped off that kid and ran.  Payback was when it was your kids' birthday.  We used the parties as a means of group daycare.  In the USA it was a social reciprocation.  Which you don't seem to need to do here.  In France, an invite meant you sent a gift but didn't necessarily show up.  Would have thought the French at least knew what RSVP stood for!  (Respondez si'l vous plait which means give us a ring and let us know if you'll show.)  Queenslanders, apparently, aren't sure until the last minute.

This of course puts the whole social reciprocation silliness in perspective.  Pressure off.

The thing is, that these are the guys you want on your side. They might forget a playdate or cancel a party at the last minute, but they are there in seconds if you need them.

And no mucking about with planning either.  They get it done.

Yesterday's dog rescue was a great example.  We are just picking up the kids from school when a big, old, goofy Labrador comes bounding across the street, wagging his tail so hard his whole body is shaking.  One man grabbed the dog before he could get hit by traffic.  Another found a piece of rope in his tru, sorry ute.  Another woman called ahead (ahead actually!) to let the vet know we'd be there.  And I drove the dog.  (In the back of our loaner vehicle, now full of Lab hair.)

The vet asked no questions, simply scanned for a microchip, and called Winston's owner.

Mind you, the Americans would have done this too.  But I believe we would have spent a great deal of time discussing and debating it first.  An animal lover in Germany would have done it alone.  The French were on strike that day.  And, yeah, you don't find dogs like that in Haiti!

The speed - no questions asked - with which a group of people came together to perform one simple task was like nothing I have seen anywhere else in the world.

So that yeah, I'd really like to complain about it all.

But find instead, that it is something I might have been put here to learn.

Just don't lose a dog when the footy is on, and you're good to go, mate.

Relax!  After all, it's Queensland.

Posted by Twintensity at 2:32 AM