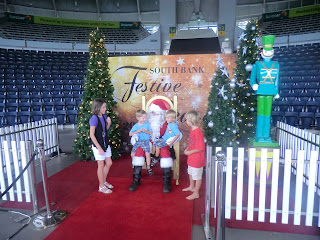 I've had some complaints from Lori about my recent blogs. Well, not so recent anymore since I wrote this almost three weeks ago – plus quite a few others – and really just haven't had the chance , or perhaps the energy, to get online at night when I finally have the kids down and access to the internet. Contentment seems to be taking away that hard edge. That plus food shopping, malls, parks and beaches on public transport. (The kids are FIT! We have cut our walking time to the train station almost in half!) It's all good, no worries.....and if you don't hear from me for a few weeks – it's just the peace and contentment of finally having found home. I'll rave about the sunshine and the friendliness, the schools and Medicare, the beaches and......


''Glad you're happy and all, but do you mind toning it down a bit? You DO realize that it's snowing here, right?!'' (This from Lori quite a few weeks ago already.)

So that this seems like the perfect time to finally post my American Christmas Greeting, a spoof of those once-a-year updates you get letting you know just how perfect everyone else's life seems to be going while you're still wondering WHERE yours is going.

I wrote it last Christmas just for kicks but then didn't post it because I was scared that people who WERE sending me cards would feel I was mocking them and stop sending them.

DON'T stop sending the cards. I love them and live off of them all year. Now if only I would send you all my address – check on facebook this week! I'll post photos and...no...we don't mind receiving belated Christmas cards in 2011!

This is for you Lori. And for Babette – who sends fantastic Christmas photos of the kids scuba diving and snow skiing every year, but doesn't rub it in – and who thinks I'm witty and is therefore brilliant! (Keep those cards coming folks, I really DO like to hear how brilliant your lives are!)

(It's taken me over an hour just to force something I've already written online - forgive me, I miss you, I just lose any and all good will fighting with the internet.  The kids ALL start school on January 22.  I'll be in touch then!) 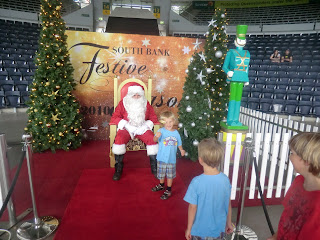 DISCLAIMER:ALL PERSONS AND EVENTS ARE ENTIRELY FICTIONAL. ANY RESEMBLANCE TO PERSONS IN MY PRESENT, PAST, OR FUTURE IS ENTIRELY COINCIDENTAL. THIS IS MEANT TO BE A TONGUE-IN-CHEEK SATIRE OF AN AMERICAN CUSTOM AND NOT MEANT TO CRITICIZE, CONDEMN OR OFFEND. OF COURSE, IF I HAVE TO EXPLAIN. ALL OF WHICH MEANS, PLEASE KEEP YOUR CHRISTMAS CARDS COMING. I DO LOVE HEARING FROM YOU. AND WHEN I GET THIS RATHER BAD HUMOR OUT OF THE WAY, I HOPE IT MAKES ROOM IN MY HEART FOR SOMETHING TRULY BEAUTIFUL. I PROMISE, I'M WORKING ON IT!

Another year has come and gone in which none of us has had the time to visit, phone, email or even twitter. Check us out on Facebook if you get a chance.

And so we'd like to share news of our family with the 400 of you who are closest in our hearts during this joyous holiday season.

All of the kids are, of course, in the gifted program at school, the school being the best in the entire country. Our son is the star of the soccer, baseball, and basketball teams and is training for his black belt in karate, the youngest ever to do so at the age of seven. He also plays a Stradavarius. Our ten year old daughter is travelling to New York City on the weekends to dance ballet professionally. And weren't we surprised when NASA called to ask her opinion about the latest space station. All of which somehow led to a modelling gig. She'll also be in the Olympics next year for stadium jumping. We've enclosed the photo of her on her new Thoroughbred. My husband meanwhile is never home, business (which obviously is booming) taking him to Shang-hai, Syndey, Berlin, Moscow and Paris this year alone. And yet he somehow finds time to coach the soccer team, sing in the church choir, travel with the cub scouts and volunteer at the local homeless shelter.

I am not doing much, still busy with homeschooling the youngest two before they enter preschool. They are trilingual now, at the age of three, but having some dificulty reading the French. I've repainted all the bedrooms in our six bedroom home (photo also enclosed) and made curtains to match. In between preparing organic vegan home-cooked meals for the entire family (grown in our own garden) and sewing all of our clothes, I have found time to open my own silk-screening business, currently bringing in $40,000 a month, in addition to continuing to work as a cardiologist at the local hospital.

Wishing you and yours a blessed and holy holiday season. (The Connors)

I LOVE YOU GUYS!   MERRY CHRISTMAS FROM RAINY (BUT NOT SNOWY!) QUEENSLAND! 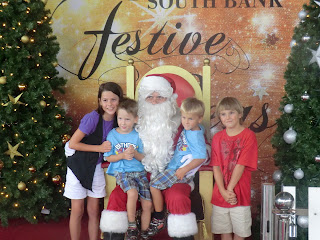 Why Lawnton? (Part One: Down the Stream) 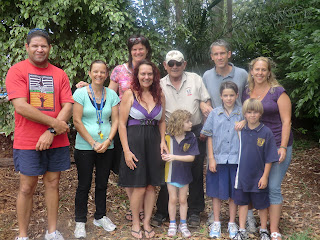 Ryan and Andrew probably hadn't even reached their classrooms on their first day at Lawnton State School – a week to the day after landing on the runway in Brisbane - when the school secretary leaned over the reception area and conspiratorially called me over. She looked both ways before she popped the question that was on her mind. (Okay, maybe not, but in my mind three weeks later she did!)
''WHY LAWNTON?'' she asked.

She meant the town and not the school. (More raves about THAT later! Less than 200 kids, an engaged teaching staff, caring administrative staff AND personalized attention for EACH student? Why NOT Lawnton State School?!)

What brings a family from the United States – the bolder, louder sibling across the globe – through the wonders of Europe to land on the shores not only of Australia, and Brisbane, but of LAWNTON, a tiny suburb north of Brisbane. The mall? The wonders of Target and Big W? Lawnmowers on Sunday? (YAY – Sundays as they SHOULD be! But more on that later too!)

I'm beginning to realize that 'Row, row, row your boat...gently down the stream'' really DOES say more about life than most people ever pick up on. (Also that sooner or later I will have to begin spelling realize 'realise' but baby steps on the personal growth here.)

There is a current to our lives, and clinging to branches or escaping onto flotsam and jetsam is only a temporary – and false – sense of control over where the great river of life is bringing us.
Have you ever felt that you were in exactly the right place at the right time, that you were EXACTLY where you were MEANT to be?

When my shrink asked me that over 15 months ago, in September 2009, I cried. (I cried a lot in 2009 so it came as no surprise!) The only time I had ever experienced that before (and I now know that I'm lucky that I have ever experienced it at all) was 20 years before, on a bus in Kenya. My new friend, Kristy, shared it too, as we sat together in the back of the bus taking us to the rest of our lives. THIS was where we were meant to be. THIS was right.

20 years later, in Holzgerlingen, I cried. If THAT was who I was, then I was lost. Because there was no way I was going to get back onto that bus in Kenya with four kids and bills to pay.

That month I decided to look into jobs in Australia, a continent that, quite frankly, had never really interested me before. English colony. Bah.

But Damon could get citizenship there. It had a universal health care system (unlike Germany whose system REQUIRES all citizens to be insured but doesn't offer them all that privilege – it's an obligation, NOT a privilege, which - in my mind at least- are polar opposites). It spoke English. And it had jobs, jobs, jobs. Unlike Europe, it recognizes MY degree. Unlike Europe, it respects Damon's degree from the USA. And, again unlike Europe, it encouraged skilled immigrants with programs such as tax incentives for first-time home buyers in Australia.

And the damn education system didn't condemn my daughter to prostitution at the age of 8. (And while this might seem like a gross exaggeration, where else is an underappreciated sensitive soul going to go in an outdated feudal system that already has her pegged to finish school at the age of 14?!) Hey – at least the prostitutes have a pension plan. And health insurance!

So that when I went back to my shrink and told her we were moving to Australia, it didn't take much time until she was convinced it was the right move for us. (I do like to think she wasn't just trying to get rid of a difficult patient because, frankly, we had lots of laughs too and compared to the rest of the saps I saw in there I was a bright ray of sunshine!)

My shrink was on board before I was entirely on myself. (I still wasn't sure I wasn't running ''from'' something instead of ''to'' something.)

''Oh.'' she said. Her face lit up with understanding and she visibly relaxed and settled back into her chair as if she'd finally put the last piece into the puzzle of my discontent.

Not exactly the answer the school secretary was looking for that first Friday at Lawnton SS. Not the answer I gave. (Although, in the rewind of my mind's eye I like to see me leaning casually across the reception window talking to her about the movement of my life, as she wearily begins to slump and fade into her chair, politely regretting that she ever asked me in the first place!)

Not what I meant to write about either.

Unfortunately this is what happens when I don't clear out my brain's cobwebs on a regular basis. (And who knew they could build up so quickly up there?!)

Why Lawnton? Because it's where the river took me.

I call Anita that October for our weekly two hour pre-English group chat....
Posted by Twintensity at 10:44 PM 1 comment: