The Wonders of Australia Part Two; From the Kids

Ah.  The wonders of a brave new world.

Corn on the cob.

Windmills on the ceiling.  (Otherwise known as ceiling fans.)

Those twisty thingies that go around and around and spit out water.  (Sprinklers.)

Really.  Aidan and Matthew can sit and stare at these for hours.  They still don't get the point.  Who knew that lawns and plants needed to be watered?  Kids born and raised in Germany aren't going to understand that rain doesn't always fall from the sky.  Water as a source of life instead of a source of discontentment.  Hmmm.  Very nice concept.

Ants.  Cool.  Just look at all of them.  Look at how fast they are! What are they doing?  What will they do with this piece of my apple?  (How is Mommy going to explain to the homeowner why we are spending twenty minutes bent over an ant colony at the edge of his lawn?!

Australians.  (Oh cool.  The homeowner just came out and smiled at us.  Didn't inform us that this was his property and that he had spent an awful lot of time on his flower bed so that he didn't appreciate children, the unmitigated gall CHILDREN, playing in HIS yard, which he owned and which was his, his, lawfully his.  Sorry.  Momentary lapse.)

Twigs and sticks and bark and seeds and flowers and.....it takes us an hour to walk home from school.  Because Aidan still can't understand that sticks can be found everywhere and anywhere here.  He still gathers up as many as he can and carries them home, arms filled to bursting.  We have a small woodpile in our front driveway.  How lucky we are to have lived in Europe, where the forests that once covered the continent from the western shores of France into the regions of Russia have been denuded for half a century.  Europeans treasure the small, carefully tended pockets they have left.  We are able to appreciate the bounty that still surround us here in this new country of ours. Twigs and sticks and bark and seeds....carelessly left on the ground,  because nature's gifts are so plentiful here that noone bothers with the discarded packaging.

Target.  Woolworth's.  Cohl's.  All in the same shopping mall.

Santa in the mall.

The waves of the South Pacific.

Cockatoos and kookaburras in our back yard.

Strangers smiling and speaking to the children, waving at us out of cars as we wait to cross the street, telling me what a wonderful family I have.

Swimming in the pool everyday.  Hearing from Mum that the deadman's float doesn't count as a stroke and learning how to swim from one side of the pool to the other without swim aids.

A deputy principal who makesMilo for us.  (Can we please go to school, Mum, please can we, huh huh huh?)

When can we play handball with the school kids, Mum? Can we go to school too?

A mum who still yells at us when we play soccer in the house and spill Dad's coffee right next to his computer.

But who then comes right upstaris and gives us hugs.  And does a goofy dance.

Must be all the sunshine
Posted by Twintensity at 1:00 AM No comments: Links to this post

The Wonders of Australia / Part One: The Koala

I'm still not up on all the accents – Australian, English, New Zealand, mixes of all three who have spent time in all three at some point or another – so that I've had to come up with another way to distinguish an Australian from a foreigner without risking offending anyone by asking.

The Australians are the ones running past the koala exhibit to get to the goats at the petting zoo.

The rest of us can be seen gazing up at the little guys in awe and admiration, snapping shots – still-lifes as it were since koalas don't move much – and shouting to eachother everytime one of the koalas shows signs of life.

''Damon. Hurry up with the camera. I think that one might be stretching.''

''Oh. No. Never mind. No, I don't think you need to bother with the video recorder.''

In fact, we were a bit worried about Aidan this week. He's gone from what we called ''Aidan's brain in Australia'' -which consisted of running around in circles and then throwing himself from side to side- to going catatonic with his hands clawed and a blank expression on his face.

He just goes stiff all of a sudden, claws up his hands and stiffly sits staring blankly at nothing.

We thought he was having a fit of some sort.

But he's real easy to pick up and carry around on your hip when he's in role. Like the zookeeper and her koala last week at the zoo.

Then there's the loss of habitat. (Hang head low as we think of the townhouse development we are in and the koala land it usurped. ''We saved that tree over there because there were koalas in it.'' the developer told us. Like any self-respecting koala was going to stay in a tree surrounded by townhouses.

We saw one in a tree across from our house the other day. And stopped and pointed and made real tourists of ourselves. But I consider myself lucky to get here before they are gone. (At the same time that I realize I am part of the reason they are gone.) In twenty years, or ten, or even two according to Andrew's math, we'll be telling kids that koalas used to run through our yards.

All too soon, koalas will cease to be a backyard neighbor and become an exotic animal here in Australia as well. I won't be able to tell the Australians apart at the zoo anymore.

But it really is a shame about the koala.
Posted by Twintensity at 1:00 AM No comments: Links to this post

Kangaroos, Connors and a Germany Bird

Once we found the kangaroo enclosure we knew we'd arrived in Australia. 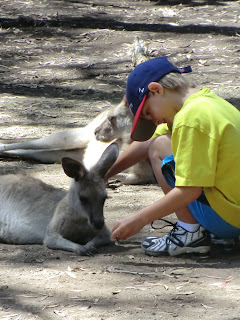 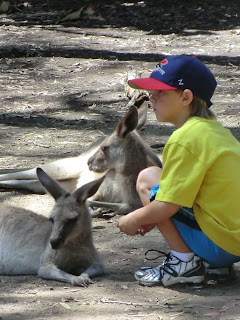 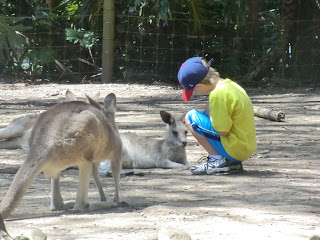 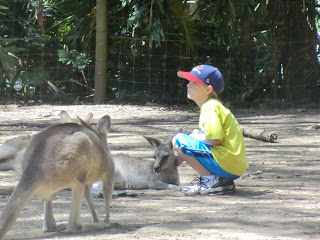 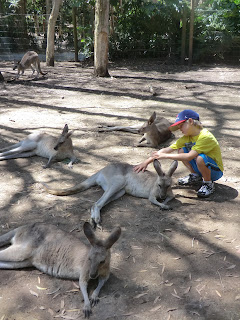 Posted by Twintensity at 1:00 AM No comments: Links to this post

We spent last Saturday, November 12, at the nearby Alma Park Zoo.  We'd been in Australia a week and it was high time to get a closer look at the koalas.

We also got to pet the kangaroos but bear with me.  Koalas make very good subjects.  (Loosely translated to mean they hold very still for pictures!)