Listening to That Voice

Oh, say it ain't so!  I have spent an hour avoiding this.  Well, over a year actually.

Shut up already!  I have other things to do.  I start law school in July.  I have written four chapters of my young adult novel.  I am volunteering at the RSPCA.  I have a church home group I go to.  And writers' group.  Last week I helped out at U8s Day at Ian's school.  And attended a choral concert for the twins.  And a parent meeting at Andrew's school.  In addition to speaking with ALL of Ryan's teachers about her progress.

Then Ryan has that horse show next weekend.  And the Abbey is coming up and we are rehearsing dances two to three times a week.  Not to mention the soccer runs - five men on three different teams (Damon coaching one) and Andrew reffing besides.  Last weekend I attended SIX soccer games between Friday night and Saturday night.  And danced Sunday.  Monday was writers' group and Tuesday was RSPCA and Wednesay home group and then the choral concert and....

Oh dear.  How far and how fast do I have to run to avoid this?!  Because I have been doing that too for the past few weeks - literally running.  Or perhaps slow jogging.  Not very fast or very far but as fast and as far as I can at the moment.

I dance too.  A lot.  And wrote that Yr 11 essay on how Australian authors today defy Australian stereotypes.  Edited the friars speech Andrew wrote for Yr 10 Romeo and Juliet.  Found 6 vacation photos per twin for Yr 6 vacation ads.  And did an awesome prep presentation on "The Hungry Ogre."

There are kittens to cuddle.

And I SHOULD be frantically scattered in enough different directions not to hear THAT VOICE. 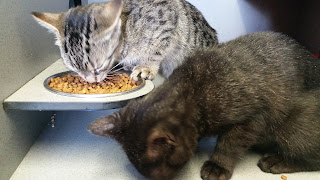 But darn it, that dread feeling that maybe cuddling kittens is a job that someone else could be doing and that I should be cuddling AIDS babies or homeless people isn't going away.  And it isn't that I'm too good to cuddle kittens or above it all, but that other people have those kitten cuddling skills and not the other ones I am being asked to use.

Yeah yeah yeah.  But I'm an immigrant with an accent.  And a mom and a pretty privileged person. Who am I to step up and tell people what to do, to try to change things?

And okay, I like law school.  And working for social justice.  And writing my novel,

But to blog about what I am really feeling and put it all out there again?

My thoughts are not the ones going around in other people's heads.  They are confrontational, controversial and possibly downright antagonistic.

When we free wrote about what the adulteress in the Bible would have been thinking when the men brought her before Jesus and asked if she should be stoned, my first thought - and I did write it down - was "WHERE IS THE MAN?"   And it got worse from there.  It wasn't conservative, it wasn't gentle - it was angry and demanding.

Is that REALLY what I am meant to bring to the world?

Well, okay then.  I've written this down.

What are the chances the voice will go away?


Posted by Twintensity at 5:36 PM No comments: Links to this post