New Labels for Everyone 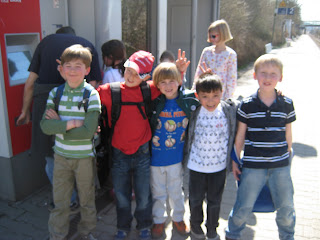 I'd just tried to help an elderly couple disentangle two shopping carts in front of the supermarket. The husband was wheeling two of them around, stuck together, muttering to himself and the wife was looking confused. So I ran up and told them not to worry about it, this happens all the time, and offered to put my Euro into the one slot to separate the two. Turns out they had already tried that. It really WAS busted. They were still looking slightly confused, but able to manage on their own. He was just going to wheel the two carts around until he got to the help desk. I laughed. "You know, you could probably just shop with them like that and see if anybody notices."

They didn't quite know what to make of me. I was laughing, I was friendly, I'd offered to help a stranger. (Last week, swear to God, Damon watched THREE separate people walk past a handicapped elderly gentlemen who was looking for help getting a shopping cart. Damon finally had to get back out of the car to help.)

I like the elderly here. They are so friendly. And thrilled that someone my age is friendly back.

The incident was strengthening my conviction not to label people based on their nationalities anymore. I am studying Hindu and Buddhist philosophy. Both believe that we are all part of a universal consciousness. Part of self-realization is seeing us all as a whole. I don't explain it very well, but then again I've spent my entire life in a Judeo-Christian society. Jesus did say something similar, something about us all being sons of God, all having God within us.

The Dalai Lama says it well too. All of us just want the same things, to avoid suffering and to be happy. When you realize that, you can empathize and see yourself in anyone.

Mother Teresa had it right too.

So I was - and am - going to see everyone as myself. No age, sex, race, religion or nationality. Just people. Part of the same universal consciousness as me.

Her husband went off pushing both shopping carts but his wife ran back to ask me a question. "What sign are you?" she asked. "Huh?" I eloquently replied. "Your sign, your sign, you know, I want to know why you are so exuberant and happy."

That nasty part of me wanted to tell her I was American, and that that's why I was so exuberant and happy, but I had my new resolution. (My accent is slight enough that a lot of people, especially serious Swabs battling with an accent of their own, don't notice it.) This had nothing to do with nationality. It had to do with being friendly.

"Aries." I told her. "April." As if that explained everything. "Oh" she replied. "I'm a Pisces." And off she went, as happy as can be, looking for her husband and the two shopping carts.

"Hmmm" I thought to myself. "Looks like I've found myself a new system for labelling people."
Posted by Twintensity at 1:10 AM