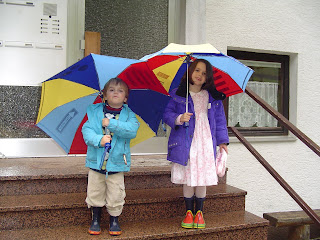 Chance of snow in the mountains? CHANCE OF SNOW IN THE MOUNTAINS? I heard it on Tuesday but I've been trying to ignore it. We are not in the mountains. It is May. If only I can hang on to denial until the sun shows up again.

It is not MY fault. I repeat, this is not MY fault. I had not put the winter clothes entirely away. Although I did give a few away to friends. We still have our snow tires on. (Okay - they're all-weather but still) And our sleds are still standing ready for use next to the bikes in the driveway. Not only because I've been too lazy to store them. Honestly, I've been working hard on not jinxing our precarious summer weather.

It couldn't be because I spent the entire sunny week we did have outside on the playground with the kids instead of dutifully cleaning the windows, could it? (Really, I was the ONLY one out there....people really WERE taking advantage of the only sun and warmth we've had in MONTHS to open up the windows and do spring cleaning. Instead of going outside. Serves them right, really. Hope they enjoy huddling together for warmth in their clean homes while I savor memories of that sunny week outdoors.)

It's been cold again too. Damon had been fooled by that streak of sunny weather last week into turning off the heaters. So the kids have to sleep together at night in order to conserve body heat. It is that cold. Today we caved and sent the twins to kindergarten in their winter jackets. Minus hats and gloves. You can only push me so far. Sigh.

The sun came out for an entire week last week. That makes a total of 19 sunny days since November. I counted. One week in March. One in April. And I'm estimating a handful for winter. It was that ugly.

I've been surprisingly chipper as the gray skies great me each morning. For one, at least it is light out. No more February darkness, regardless of the rain. And then, is IT May. I'm assuming there must be an end in sight.

I'll be fair; it's not always quite THIS ugly here. We had warm fall weather - an Indian summer, German-style (meaning no parkas, just heavy layers) until the end of October. I keep track. And usually we do see the sun for a week or two in Februay - just a taste of things to come. And we've got the winter jackets away by April. Summer sucks mostly - unless you are from England in which case it is fantastic. It either rains the entire month of June OR July. You don't get both. The summer the twins were born it rained EVERY SINGLE DAY in August. Believe me, I remember.

The first summer we were here it didn't stop raining for more than two days in a row all summer. Again, I know. We were still naive enough to be waiting for the rain to clear long enough to heat up the water in the outdoor pool. Now we just go with jackets and umbrellas and seek shelter when the worst of it hits. The summer BEFORE the twins were born - and my parents were on vacation with us in Switzerland - it rained so hard and long that the Swiss had to call out their national guard for flooding. Then again, we have an issue with Swiss vacations - our two October trips there have also ended up as minor national emergencies, with mountains and roads closed down to unforeseen early heavy snowstorms. In Switzerland. I have come to believe it has something to do with us crossing the border.

The Brits I know honestly don't see what all the fuss is about. After all, you wouldn't want it to be hot all of the time, would you now? All that sweating! (It's called SUMMER folks, and it's a lovely custom in much of the rest of the world!) I have to look to my South African friends for sympathy.

Anyway, Aidan and I had a moment to ourselves Thursday morning. And so I asked him if he would please help me call Mr. Sun. "Mr. Sun", we said - quite sternly I might add - "Mr. Sun. Come here please." "Here. Right here. Now Mr. Sun. Here." I did a little Bill Cosby calling the kids routine. (Funniest skit EVER - google it NOW if you've never heard it.) Nothing. Aidan looked out the window and discovered the source of the problem.

"Mom." he said, quite seriously "Mr. Sun doesn't have any eyes."

Oh I get it. He's having trouble FINDING Germany.

I'm going with the sun in his traditionally masculine role since I am assuming he's not LISTENING to us very well either! Then again, it's supposedly a young sun, right, maybe she just hit puberty.

So yesterday the kids and I spent some time drawing pictures of what we remembered the sun looking like the last time we caught a glimpse. Kind of like a police sketch of a missing person.

I'm thinking of posting them on the Internet.
Posted by Twintensity at 3:33 AM