FIghting For The Short Bus 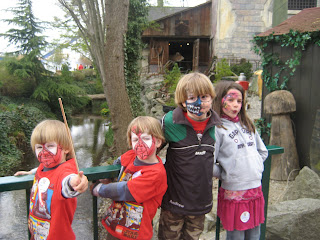 Americans know the "short bus." In a country where kids are bussed to school on large, long yellow school busses, the "short bus" is the yellow bus that picks up the "special ed" kids. Short yellow buses are also used on long rural routes with few kids, but....the stigma remains. The kids coming off the short bus are the kids whose limbs flop awkwardly from wheelchairs, who wear helmets and crooked smiles, who are...let's face it....just thrilled to be able to attend public school at all.

There is actually a short bus in my area of Germany. It picks up the kids with severe debilitating ADD and slight learning delays and brings them to a special school nearby with class sizes of 6 - 10 and one class where the teacher's dog joins the class daily. We also have a child with Down Syndrome in our kindergarten and a blind child in the local grade school.

So, I guess what I may be fighting for isn't exactly "special ed." I don't actually know the status of special ed here since none of my children fits into the category. I don't see it, I don't hear about it, but that doesn't mean it doesn't exist or isn't excellent. I do know anyone with a physical handicap requiring a wheelchair or other walking aid would have to be carried up and down the stairs of the elementary school. (I know this, as well as the impossibility of using any public buildings, such as the gym and Rathaus, because I was unable to navigate them with a double stroller, since they have no ramps, no elevators, and are therefore wheelchair - and double stroller - inaccessible.)

"Special" kids in Germany are quick, bright, and again, let's be honest, often blonde. Or at least from your traditional German family. To make it as an immigrant, you have to not only be very very special, but also able to assimilate into the traditional German view of what a scholar is.

Oh. Yeah. And do it before the age of ten.

Everybody agrees that the current system is absolutely stupid and unfair. And also that it will take decades to change it. (Put in your own comment on the pace of change in Europe; I can't even begin to go there right now.)

Right now the kids are filtered into three separate school systems beginning in fifth grade. (Some rare cities such as Berlin are beginning to do this later, in seventh grade.) The smart kids go to the Gymnasium, basically highschool, with ages from 10 thourgh 18. From there they are expected to go to college. (Decided, once again, at the age of 10.) The average kids go to Realschule where they are prepared for very respectable careers as bank tellers, office staff and kindergarten teachers. (No kidding, the FIRST teachers your kids have in Germany aren't even considered good enough to go to college.) The dumb kids - and immigrants - go to Hauptschule, whose name has now been changed to Werkrealschule to make people feel better about it. And, although everyone keeps trying to tell me that Hauptschule is fine, that the kids are just slow starters, and that they can work their way up from there, the fact remains that noone knows what to do with these kids in the future.

Hauptschul kids officially graduate in 9th grade. Ready for a job as a bricklayer or prostitute. And there aren't a lot of jobs open for bricklayers right now.

Okay - the official line is that these kids mature and feed into the Realschule, in exceptional cases even into the Gymnasium and then into college. The system is supposed to be flexible, meeting the individual needs of each individual child.

But in reality, Germany has labelled and cut their losses on an overwhelming two-thirds of their kids. By the age of 10. Turns out I am too American to accept this. Instead of "no child left behind" they voluntarily weed out the kids to leave behind, and leave them behind early. "Make a sprint for college, son, and don't look back at all the dumb friends you have to run over to get there." I'm sorry. It's just so typically German.

Don't get me wrong. The American system is far from perfect too. But at least there is debate and change. At least we are fighting for the right of EVERY CHILD to learn. At least the theory works, even if the reality is still ugly and messy.

The top third of ANY education system are going to do fine. Those are the third you only need to place a book in front of and they sop it up. It's really really hard to mess up with those. (Believe me, I know, I have one of those too.) The sign of a really superior education system would be its ability to help those who can't learn on their own, its success rate with those that actually need HELP learning. I mean, isn't that what teaching is all about?!

So, yeah, I guess in the end I'm just fighting for the same old thing that parents everywhere should be fighting for. More money for teacher's aides, for reading programs, for special education classes.

I'm still trying to convince the school Ryan even HAS a learning problem. (Shouldn't they have picked this up by now? Or is it easier just to filter them out than it is to teach them. More cost-effective in the short-term, I guess.)

Funny isn't it? All those years you spend laughing at the kids on the short bus. Until you become a parent and realize how "special" every member of society is, and how they all should have access to the same opportunities.
Posted by Twintensity at 7:46 AM