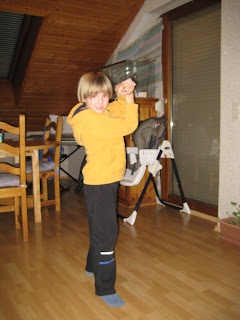 Learned something interesing in Body Fit this morning.

We continued the conversation during our stomach crunches. The general consensus was that it was okay to watch an Arnold Schwarzenegger film with the sound off. Something about that terrible accent of his.

All of which I'd heard before. Until it hit me that these were GERMAN-SPEAKERS complaining about the accent. "Wait a minute" I asked. "Are you talking about his terrible ENGLISH?" No, no, they were talking about his GERMAN!

"It's not just that he's Austrian," my mat neighbor explained. "He's okay in his early films. It's just that after all that time in America he really has developed the worst American accent. He can barely speak German anymore."

BARELY SPEAK GERMAN? Let me clue you in guys, the guy is barely understandable in English too!

Don't get me wrong. I LOVE Arnold. I like his ideas; I actually think the guy has brains as well as brawn. He just has problems expressing them.

And- all right - I simply like looking at him. What's wrong with that? I'm suggesting we get the guy on the presidential ticket.

Obama is hot, but he's no Arnold!

(In eight years, ladies with brains and conscience, in EIGHT years on the ticket!)
Posted by Twintensity at 5:21 AM