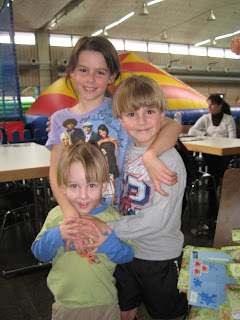 The counselor was there to categorize my child, not help her.

I am extremely pleased - no let's face it - ecstatic beyond belief - to announce that Ryan has an above average IQ. I still don't believe in IQ tests. But I'm still pleased, because on this graph she is smart.

And the graphs matter more than the reality.

According to the graphs, the counselor HAS to at least recommend the Realschule for her, possibly even Gymnasium. You can tell that made her uncomfortable, but she IS German and she WILL follow the graph.

Never mind that my child would never survive in either one of those schools. Graphs don't lie.

I didn't bother to ask which subjects were the ones where she shot way over the mark. It was gratifying to see, but it wasn't really important. The two that interested me was where the chart showed absolutely no comprehension at all. Above average intelligence, generally high scores and two that are so low they barely register.

What does that say to you?

The counselor hadn't bothered to check.

Turns out they were in spatial comprehension - concept - and in picking out a fifth word that doesn't belong in the group. Also comprehension of a concept. The counselor decided it was because Ryan was bilingual and that she just needs to increase her German vocabulary.

Are you kidding me? And this is the lady who is supposed to be trained in this sort of thing.

She obviously didn't care. Not her job. She had done the graphs.

Never mind that the graphs clearly pointed to a child with a learning disability - my guess is on a mild form of ADD that doesn't manifest in the typical hyperactivity but in dreaminess and an inability to synthesize details into a larger ideological picture. I know one other child with the disorder and now see the similarities. I clearly see it in the math, but also in retrospect on her slowness to convert her knowledge of the alphabet into sounds and reading.

I drew a blank stare when I commented on the results pointing to a learning disabilty and mentioned that Ryan also has juvenile hypothyroidism - which has been linked to an increased incidence of ADD and other learning difficultires. I asked what system was in place to help children with learning problems.

What do they do with all the German children who have learning disabilities?

She checked the box marked Hauptschule.

My God Germany, what are you doing to your children?
Posted by Twintensity at 3:09 AM