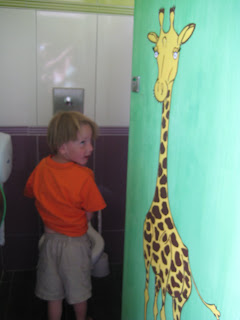 I love France. We all do. I love the French. They seem to like me back. They let me practice my French instead of jumping straight into English or German. Mostly because they don't speak English or, god forbid, German. And the camping is fun too. Everyone is friendly; even the Germans. The sun is strong. The pool is heated. The beach surprisingly NOT crowded. And Sue was right, the public showers are really quite good.

I still have some issues with the French meat though. This is the culture reknowned for its cuisine – REALLY?!!! Or we can get the British stuff. Enough said. We're doing just fine with bar-b-que, rice and some cucumbers and tomatos. Breakfasts make up for it too – CROISSANTS and PAIN-AU-CHOCOLATE. It doesn't get any better than this. Tonight we are trying shrimp on the barbie.

I've been spending some amount of time getting acquainted with the public toilets here. (Mostly Matthew.) Although I WOULD prefer to be spending the time on the beach, or at the pool, I've gotten to feel quite at home in them. So much so that yesterday's incident was a little like having a stranger come into your home and....well....use your bathroom.

First off, I'm kinda assuming it's a unisex bathroom. Something I have a hard time getting used to, although it really doesn't bother me in theory. I'm in there with Matthew after all, and I'm used to sharing my ''privacy'' with at LEAST two little men at home. Still, I can only compare it to what a Muslim woman must feel like when she's in the wrong side of the mosque. Every time a man walks out of a stall, while I'm standing waiting outside of Matthew's, I feel like I shouldn't be there, like I've just encroached on some forbidden space.

Don't get me wrong, the men don't seem to mind at all. They generally flash a warm smile in my direction (Did I mention I LOVE France?!) and leave with a happy ''Bonjour.'' ''Bonjour'' I mumble back, shyly, gaze at the floor. Where is my burka when I need it?!

I'm also getting an inside look at the private workings of a male bathroom. ''Wash your hands,'' I want to scream. ''Lavez votre mains.'' For crying out loud. There are some things you KNOW – like that most men aren't going to bother to wash their hands if they aren't being directly observed by their mother – but that you just don't want to SEE. Let the women of the world dream that you've retained a modicum of what we're been trying to teach you since childhood.

Back to yesterday. Matthew and I were at the -one, tiny- sink washing his hands. Only because he had so much dark, Mediterranean sand on them that it was going to be hard to....uh...take ''things'', or ''thing'' rather....''in hand'' unless he washed some of it off. (I don't have one but, from what I've heard, you don't want to be handling it with sand paper.)

We headed back to what I had assumed were the kiddy potties only to see men standing in front of them using them as urinals.

Faux pas. Faux pas. Had I been seating my child on the men's URINALS all this time?!

''Bonjour.'' ''Bonjour.'' Both men turned around at about the same time and left. Without washing their hands. I had to close the doors a bit to look at the front. (Do I even need to mention that neither of the men had bothered to close the doors?!) Both doors had a giraffe on them. Both doors only came up about two-thirds of the way of the ''normal'', what I had been assuming were adult doors. Was I supposed to know that the giraffe is some sort of universal sign for men's urinal? Or was it just the French sign for it? Does two-thirds of a door signify ''urinal'' in a public mixed-sex bathroom?

I'm a beginner here. Any camping I've done before this was in the USA, mostly in Alaska. Let me just clue you in, ''camping'' in Alaska does NOT include public toilet facilities and a pizza shop and grocery store! (More like melting the snow for water, checking for bears and bringing your rifle just in case. And oh, either backpacking up a mountain or rowing over in a kayak, to get there.) But I'm not complaining. Honestly, I like the ease of ''camping'' in Europe. Remember, I've got four kids. I need a convenience store in the vicinity more than I need my own private island and shotgun practice with our ''empties'' on the beach. (Ah, those were t

I think I've gotten to the bottom of it. (So to speak.)

The giraffe potties here are the first ones on either side as you walk in the door. The only way you are going to get men to stop using the children's toilets as urinals is to put the children's urinals at the END of the line. (Or in a separate room.) It's nothing personal. It's just a guy thing.

I've also learned that, if I ever have to use a men's bathroom in an emergency, that I should use the LAST stall in the room.

I'm not complaining. I love it here. The men have other, better, qualities – like eye contact, and a smile, and this look that hints that they don't mind so much that you've got four sea urchins in tow behind you – that I'm going to forgive them for peeing on the kiddy potty. Cést la vie! And it's a good one.
Posted by Twintensity at 8:49 AM