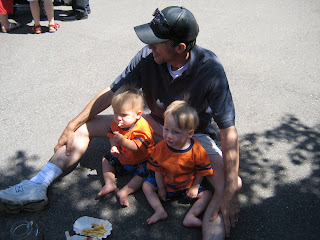 Just got back from our annual visit to the Altdorf Volunteer Firehouse. It's the usual small-village beer fest, with brats and beer. It's also a chance to climb into the firetrucks, play with water and jump around on the trampoline.

Usually we're in shorts and T-shirts.

This year the temperature is barely in the 50s. Although the rain did hold off.

The first years we went alone, thrilled to be part of a village community event. We liked it so much - hokey, but fun - that we began to invite friends. The Grabzynscki's one year. Joe helping Andrew man the firehose. Kristy in the trampoline with two year old Matt. Us camped on the tarmac with Aidan and Matthew, who were at that awkward "can't really get anywhere, but don't like to sit still in the stroller either" stage.

We had so much fun that year, the older kids soaking wet, the younger ones stuffing themselves with french fries, that we sat out on the lawn or tarmac all afternoon.

Last year we met Maria and her brood there. It was my first time out of the house in over a month, and I was still carrying the fetus they'd told me was dead. Damon and I were in shock. But the kids had fun. And Maria (Bill was out of town) led Damon and I to her house where she fed us burgers and beer.

It's not a sad memory.

Our annual pilgrimage to the firehouse this year reminded me of all the times in Altdorf that I've shared with the friends close to me here. The Grabzynscki's have moved to Georgia, but I still remember our boys - and a girl - walking in the village Fasching's parade together. And I can't forget all that the Adair's have done for us - usually a good homecooked meal and a walk and a talk when I really needed it. Maria was always here - just down the road - and I don't think it has hit me that she's really gone.

And then there's the 4 of July. Which always reminds me that I had to cancel Babette and Erica's barbeque plans because I was busy delivering the twins. We celebrate now with a low-key party at the Hildrizhausen pool. Lori. Anita. Maria. Whoever can make it.

Last year it threatened to rain and Maria took us all bowling on base. (Except for poor Anita, who somehow missed the message, and ended up at the pool anyway!)

So this year we took the Olivo's to the firehouse. It was cold. It was empty. We didn't let the kids play in the water. But the fries were still good, and we still sat in our usual seats on the tarmac.

Omar and Damon took the boys up a basket suspended by a crane. Then we mosey-ed through the fields in a covered wagon towed by a big, green, tractor.

On the walk home Damon and I found ourselves telling Omar about all this little village has to offer. "Yeah, in July there's the annual Bach Fest, more beer and brats. In September there's the International Motocross." We also proudly pointed out the new sidewalk. "Yes, this is only a year old. You know, when we moved in six years ago there was no sidewalk and the Netto and Edeka (the two small grocery stores) had just been built."

Altdorf has its memories, but its the friends we've made here, not the town itself, that matters.

Kristy in Georgia, Maria in Colorado, Tracy back again some day in Texas...life is change and people move on.

But isn't it nice to know, that on a spring Sunday every mid-May, Altdorf's volunteer fire department will still be holding its annual open house? And with it our memories.
Posted by Twintensity at 7:15 AM