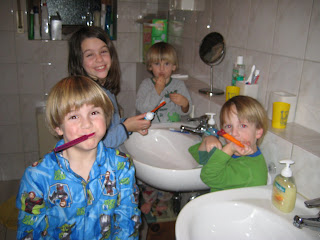 Going to the bathroom at our house isn't as easy at it looks.

The other day I was helping one of Aidan's and Matthew's friends. He's not yet four, so he was more than happy to stand still for assistance. He stood perfectly still while I undid his zipper for him. Stood still as I took down his pants. Undies next. I was kinda waiting for him to, well, take things into his own hands but...no..still standing there. Hmmm. Could be he wanted me to hold it for him too - been there, done that, - but I didn't want to offend.

He just stood there patiently waiting.

Turns out he sits to pee and was waiting for me to arrange the toilet seat and step-stool.

At least he was able to make it out of the bathroom on his own. Only because noone had told him about the high water.

Matthew has to be lifted off the seat and onto the bathmat because he doesn't want to fall in and get his feet wet. OH you don't know? The water. The water that is the bathroom floor and requires an intricate maze of bathmat and stepstool to cross.

Aidan just has an issue with stepping on "the lines" but is usually able to tiptoe out on his own.

They tell me I'll miss the simplicity of these days, but right now the simplest things are looking mighty complicated!
Posted by Twintensity at 12:44 PM