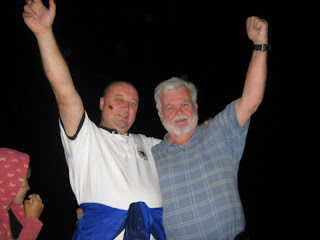 That's a German man embracing an American man (Damon's step-dad) after the Germany-Ghana game a few weeks ago.

Damon's folks were here for only a few days, but caught the best of us. Smiling, happy, friendly, social, even goofy Germans. All rooting together for a common goal - one that doesn't have the rest of the free world quivering in their boots this time. 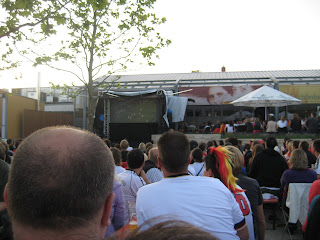 Even more so, Africa was on display. And the world rooted with them and for them. Sure, we wanted to beat Ghana, because that's what you do in a game. But we also wanted to see them win. People asked me how I felt after Ghana defeated the USA. Sweet that. But in a game that was billed as "The American Dream" versus "African Hope," well you couldn't be sad the game went to the country to whom it meant the most.

But South Africa really set a standard of generosity and good will for the rest of the world to follow.

It's called Ubuntu. No, not the Linux program, but a south African philosophy of human interconnectedness.

Desmond Tutu defined it in 2008 as "the essence of being human. Ubuntu speaks particularly about the fact that you can't exist as a human being in isolation."

The World Cup brings us together as a nation for a few short weeks every four years. It's the only time I follow soccer, but I know all the players every time. And have opinions on who was fouled and whether an off-side took place, things I know nothing about in the real world, during a non-World Cup year. 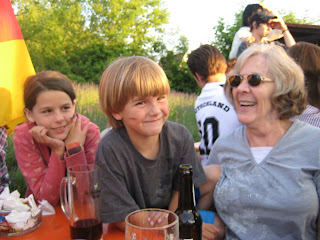 But this time I feel the Ubuntu. I do.

I cried when Germany lost to Serbia early on in the elimination rounds. Not just because we lost but because Germans were cheering their team anyway. And because I suddenly realized that Germany winning the next game meant Ghana losing. And that one nation would cheer as another one mourns. That no matter what happened in a game, someone was celebrating as someone else lost.

And goodness, I suddenly also realized that it is only a game. Really. That there are much more important reasons to celebrate and much sadder reasons to mourn.

And that if we could unite as a nation over this, then we should be able to unite as a world over other, more important matters.

"A person with Ubuntu is open and available to others, affirming of others, does not feel threatened that others are able and good, for he or she has a proper self-assurance that comes from knowing that he or she belongs in a greater whole and is diminished when others are humiliated or diminished, when others are tortured or oppressed."

It's the exact opposite of Schadenfreude. It's the ability to be happy for your enemy, because they aren't your enemy after all, but a part of yourself. It's what the Taoists call Tao, the Hindus call Universal Consciousness. And I believe what Jesus meant when he talked about us all being sons and daughters of God. Oh. I get it now.

My Ballack shirt goes back in mothballs after last night's win against Uruguay. (And yes, it was nice that we won. Nice though, not life-changing or world-altering.)

But I'm working on keeping the spirit of Ubuntu alive more than once every four years. 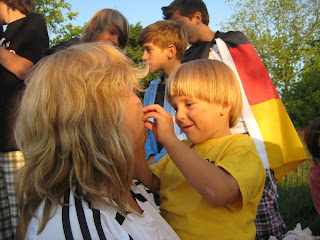 Posted by Twintensity at 4:15 AM