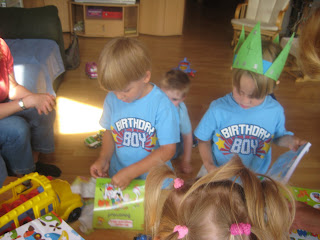 Aidan and Matthew and I have been to a bunch of birthday parties lately. Our little kindergarten group.

Two of the other kids have one sibling. The rest are single children.

And I explain how hard it is to do puzzles - or now ABC books - with TWO kids wanting my attention at the same time. Puzzling with twins. It sucks.

So that we've all let go of the guilt and figure we - and the kids - will deal with life as it is dealt. It's the way it is. No judgments. No guilt.

This is rare. This group happens to include a number of "older" moms, a number of first-generation German moms AND, most remarkably, almost all working moms.

They are even open to the fact that I would like MORE children. Astounded but totally accepting.

The thing is, I'm a slow learner. I know a lot of totally well-adjusted moms who have the whole thing worked out after their second - or even first - child.

But it took me a while. And now that I've finally gotten it - and apparently am able to make it look like second nature - well, I don't want all that education to go to waste!

1. Who cares if the kids are riding the bikes barefoot?
2. Let them eat the goody bag all at once. Saves me the hassle of worrying about it for the next three days.
3. Two meals in a row of French Fries only won't kill them.
4. The evening news is scarier than an 'R' rated horror movie. Nothing my kids need to see right now.
5. I can teach my kids better than anyone else can.
6. They ARE listening to the morals you are trying to instill in them.
7. Kids will learn to ride a bike, swim, swing on their own, in their own time.
8. If they won't eat it, then they aren't hungry.

Why would I throw all this knowledge away?!

I was actually pretty laid-back with my first kid. (Then again, she was easy.)

But I'm figuring the fifth would pretty much raise himself!

And see, there's the heart of it.

But loving the process!
Posted by Twintensity at 10:20 AM