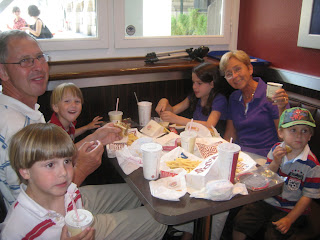 I took the kids to Burger King last Friday for lunch. BK Germany is running a special: buy one adult menu, get a kids meal free. (No, no the German economy isn't hurting. I was also heading to the mall to take advantage of the 50% sales that were nonexistent here until recently.)

I discussed strategy with my staff on the way over.

"Ryan. Andrew. Listen closely. We can get FREE FOOD if we buy adult meals. Do you two really need a kiddy menu and a cheap plastic toy?"

Ryan and Andrew evaluated the importance of a cheap plastic toy to their well-being.
Ryan opted for an adult menu in order to help me out. Andrew was torn, but decided to check out the toys first, before making his decision.

By the time we reached the counter, I knew that Ryan and Matthew wanted chicken nuggets and that Andrew and Aidan were going to split a burger and some nuggets evenly between them. Andrew decided he really did need a cheap, stuffed wrestling figure that made music when you pressed his belly. (It is now sitting in the kitchen, on its way to the trash, with Aidan and Matthew's cheap, stuffed wrestling figures.)

I was pretty impressed with myself. The man in the business suit behind me was less so.

"Are you guys still running that buy one, get a children's menu free deal?"

She looked at me - and then the four kids - warily.

"No problem." I smiled. I had this under control.

I ordered the two adult meals, got my two free kids meals and ordered a third for Andrew. We had the sauce and ketcup worked out in a matter of seconds. Ryan then marched the three boys off behind the counter to pick out their dolls. (Let's call them what they really are, c'mon guys, ACTION FIGURES? Really.)

Next I asked her to lead the twins upstairs and find a table. The three of them went. I asked Andrew to help me carry the second tray with fries. He was a gentleman. (I am LOVING these older children; I hardly get a chance to carry my own bags anymore!)

I smiled at the businessman behind me. He still wasn't impressed.

Later, he sat upstairs with his three friends, also all in business suits. They studiously ignored me as I organized the table, complimented the kids for eating everything on their plates, er napkins, except the fries and who can ever finish those?! Andrew and Aidan then went off to play in the kiddy cage, Matthew did a back-dive onto his head off of his seat, and I carried him screaming with me while I talked to the six-year old girl in the kiddy cage who was beating the stuffing out of my eight-year old and four-year old boys.

I imagined I was the perfect image of a living hell for most German men.

But I heard them as I was herding my staff down the stairs, meals entirely eaten and table wiped clean.

"Maybe we should ask that American lady with all the kids to work for us."

Sorry boys. You couldn't afford me. I really like the job I have.

But thanks for the compliment. It's nice to know people are noticing.
Posted by Twintensity at 5:03 AM

Labels: travelling with kids, working outside the home