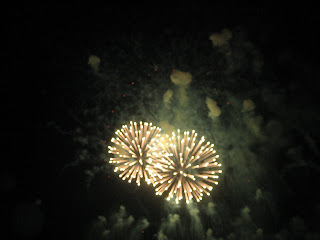 Being half German, I have always wondered what I would have done as a German during World War ll. Before having children, the answer was clear. I would have fought, worked with the underground, rescued as many people as I could and worked to destroy the government.

Having kids made me way more vulnerable. Would I have put my kids lives in danger to save someone didn't know? Would I have spoken out against the regime when I had more than myself to worry about?

I know. This is all very serious after a silly town meeting. But it was held in a Rathaus that saw town meetings during both World Wars. And the tone was distinctly authoritarian. Polite and polished. But authoritarian.

And now I know where I would have stood. I wasn't at home. (Although my children were.) I wasn't intentionally rabble-rousing. I wasn't even a leader.

But I was part of the rabble. And I enabled the leaders to communicate more effectively.

"I say we go to the papers." said a father from the other kindergarten. (Look at that - strangers from both sides of town working TOGETHER! I am SO proud.)

I got out my pen and notebook and had them exchange numbers. Next we figured out how to arrange the next two meetings of the two separate kindergartens.

"Our Elternbeirat is already sending out a letter telling us to leave it alone and forget about it." said someone from our kindergarten.

"And that's okay." I replied. That is their job. We can do this without them, as concerned parents in our own right."

They'd honestly never thought of that.

Then again I'd never thought of not paying the monthly kindergarten dues.

And when one dad suggested a rally with the kids in front of the Rathaus, well, I honestly thought I might be in France!

I felt silly being there since we are leaving Altdorf in September anyway. But the word had got out that I had councilled a friend this morning for over an hour. And told her I would stand behind them. The phone rang all afternoon. And I was there.

It did mean something to them that I was there supporting a cause that wasn't really mine to fight anymore.

But it means as much - or more - to me to see them working together. It gives me hope in this country, in my fellow countrymen.

It takes a few, brave individuals to start a movement.

"Why didn't they even let the parents from both kindergartens talk to eachother?" asked one mother.

"Because that is their biggest fear." I replied.

There IS strenght in numbers. A united front is the biggest danger.

When we all realize that we can work together - that we all DO have enough in common to work towards a common goal. Well, these little movements change the world.

OKay. Okay. It;s only a litte town meeting. I was this excited when I got voted onto Elternbeirat the first time six years ago too. Think of all the good I could do! Until I realized it was just the mouthpiece of the school administration.

But this time it's not about me. Turns out I like being the back-up, the support.
I LOVE watching someone else build up a strategy.

And I know what I would have done sixty years ago. I would have done my best to keep my family safe. But I am just not the type who can sit by and let my friends fight without my support.
Posted by Twintensity at 9:53 AM