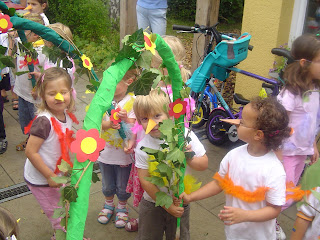 I had a chance to stand up for what I believe in Tuesday night. And I did it. Along with about thirty other parents from Altdorf who are dissatisfied with personnel changes between two of the kindergartens here.

The mayor and elected officials listened politely to the first mother, representing one kindergarten. But began to roll their eyes at the second.

I had been planning to keep my American-accented mouth shut but really felt I couldn't leave her to stumble alone.

This was hard. All men on the board (one woman in twelve positions), in business suits, mocking the stay-at-home moms who obviously had nothing better to do than waste their time worrying about something as dumb and mundane as kindergarten personnel.

"Do you have a question?" asked the mayor's appointed stooge. "This is a question and answer session not a time to voice your opinion."

Oh please. Like I can't voice my opinion in the interrogative form!

"Why weren't any parents consulted before any of these decisions were made?"

They laughed. Loud and outright. All of them. While rolling their eyes.

"We did send out the letter informing you of our decision this week."

I was honestly embarrassed for them. And I had another question.

"But - and correct me if I'm wrong - but isn't that what democracy is all about?" I was admittedly treading on thin water. I wasn't quite sure Germany defines itself as a democracy. And I have an obviously American accent. But a number of parents nodded their heads. Good. Apparently they'd learned about democracy too.

And I really wanted to know. "Mr. Mayor. I understand you have to make the final decision. That is why we voted for you. But...what I don't understand is why the parents weren't brought into the decision process at all."

I still don't get it.

Maybe I should look up the definition of democracy but....I come from New England and I remember learning something about town meetings and...yeah, I think debate and discussion were a big part of those.

The mayor tried to inform me how things are in the real world.

"You wouldn't have a say about personnel changes if you were working for IBM or Daimler."

"No." And I'll be the first to admit that this last wasn't a question. "But you'd be fired if you were having problems with your coworkers."

And we were dismissed.

Thirty of us, from two kindergartens, had our own town meeting on the Rathaus steps. Seems two teachers from the one kindergarden had such personal difficulties with eachother that they had to be separated. And come to ours. And two of ours - our two best and the only two under 50 in a staff of 8 - are going to them. Noone is happy. In the real world you get fired. In a socialist government position they aren't allowed to fire you - so backroom deals and shady compromises are made.

"Altdorf is being run by a Mafia." said one mom.

It's not. It's being run by humans, and humans are imperfect.

The decision has been made - for us. And the kids will be fine.

But a few Altdorf parents are getting together to protest anyway. Hang out with the kids on the Rathaus steps. Write a letter to the Boeblingen paper. Not pay our monthly kindergarten fees.

"It's not going to change anything." one mother protested.

But it already has. Thirty parents realized that there is strength in unity. I leave Altdorf knowing there are parents out there willing to stand up to authoritarianism, willing to speak their mind, demanding to be given a voice in their children's education. And they are going to work together to solve a problem.

It's not easy to do in a culture that generally just yields to authority.

I am so proud of them.

I apologized for stepping up to the mayor with my imperfect German and my American accent. "It was just perfect coming from you." said the mother I had supported.

We stand together - two distinct kindergartens - for our right to have a voice in our children's education.

Maybe this "old village" has tasted a bit of the New World after all!
Posted by Twintensity at 2:07 PM