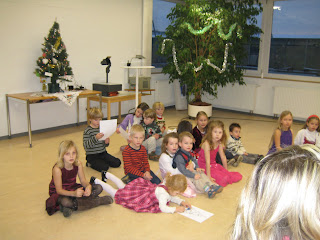 When Tony walked into his living room at 10:30 last night he found Sue and about a dozen of her friends still sitting around chatting, drinking wine, and generally having a good (no, sorry, make that FANTASTIC!) time.

"So, you guys been saving the world while I was gone?" he asked.

What a good sport. Then he served Spanish cheese and Mexican something-or-other and joined us.

Were we saving the world? First we discussed English Group participation. As in, please do. Then we went over the different age groups and which children were ready to move to the next level; from the infant and mom singing circle in the preschooler group, or from the preschooler group into the BIG KIDS. Other topics of discussion included lesson plans, the Easter session and our annual summer picnic. In between we discussed what lingerie to wear to the "Teddy Bear Picnic" in the spring, what Karen and colleagues did ten years ago in Greece and what happened when her husband found out about it eight years later, and how getting your hair done professionally counts as basic standard of living once you hit a certain age.

I'm going to say we were doing our part.

When I called Sarah on Saturday night to talk to her about Haiti and about how she and her family were holding up, we spent an hour talking about...well, really talking a lot about ourselves and about our lives as women, wives and mothers. Sarah and her husband Ronald were matron of honor and best man at my wedding. (As the only two people in attendance they were also photographer and babysitter for Ryan>) I was maid of honor at their wedding in Haiti. Before all the marriage and babies, Damon and Sarah and I were Peace Corps volunteers in Haiti and Ronald was our Kreyol language instructor. (No one thought either relationship would last let alone produce six children!)

Ronald's immediate family seems to be fine, thank you for asking.

I didn't know what to expect, sobbing, grief, the tragic Haitian-American family. What I got was...well, Sarah! Haiti was obviously on our minds. We talked about Laurie and about how her whole NGO was destroyed. She has lost family, friends and colleagues. But she found that Eric, her boyfriend, was alive and doing well, after two days of believing he was dead. And all of the children from her schools in Cite-Soleil survived unharmed. There were miracles amidst the tragedy.

Then we talked about what to do. Ronald would like to go as an interpreter. Us too. And everyone returned Peace Corps volunteer from Haiti. But Diana is 36 weeks pregnant (yay!) and we, well, we have kids that need our attention. It's hard to sit by, doing the dishes and going grocery shopping, when we know we COULD be on a plane to Haiti. We could be doing great things.

I would send Damon - or go myself - if we could afford to not earn money for that length of time.

In the meantime, Sarah and I do what we can. We keep ourselves strong. We go to work. We keep the kids healthy and more-or-less decently fed. We do the dishes and the grocery shopping. I drink wine with friends and plan the annual English Group picnic.

It's weird to be going on about my everyday business when my mind is preoccupied with tragedy an ocean away. But comforting too, that Sarah is feeling the same way.
Posted by Twintensity at 9:44 AM