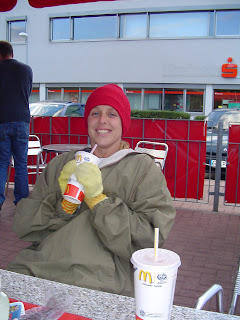 Two really important things they missed teaching me in the "gifted" program.

The first is tenses. (Not how to write a complete sentence; I don't do that on purpose sometimes.) Tenses as in past, present and future. Those three I was "gifted" enough to learn myself. But present continuous? Past perfect simple? Maybe it WAS better I never knew there were six past tenses; I might have been too scared to pick up a pen.

I distinctly remember a day in middle school when the English teacher skipped basic grammar. "Oh you guys know how to use it correctly already," she said. And proceeded on to something more creative, something better suited to our highly gifted intelligences. (My guess is that half of this "highly intelligent" class was playing paper football under their desks; I was usually reading a book under mine, having been told so many times how intelligent I was that I figured I could keep up by just being in the room. At that point, I still could too.)

Creative is good. I love creative. But now we have at least one NASA engineer, an emergency room physician, two veterinarians, a bunch of finance guys on Wall Street and some museum curators who can't write a lick of English. Oh, and all those lawyers. Never forget all those gifted lawyers. (Let's face it, I met a lot of engineers at Cornell. If there is ONE NASA engineer who can string a simple sentence together, in ANY language, I'd be surprised. 1200 SAT scores at the Cornell engineering school meant a 400 verbal.)

The problem being that one of those veterinarians decided she wants to be a writer. And the only way she can communicate with her writers' group is to say, "Oh, Like I'm like kinda like thinking like about putting it all into the 'I have danced" tense kinda like." Very impressive.

(Funny enough, they did teach us all about punctuation at some point down the line. You can see how much of that I've retained. What a waste.)

But the opportunity my teachers really missed out on came in the mid-eighties in highschool, when waves of Haitian refugees flooded the NYC area. Literally. They came in tiny wooden fishing boats through shark-infested waters. Does anyone else remember this? Word up! Haiti was hurting long before the quake on January 12. I believe that's the past continuous tense; how appropriate.

All I remember of the Haitians in my highschool was that we all considered them very odd and kind of beneath us. I mean, how stupid can you be? You come from an island that speaks French and you can't even make the grade in French class? They were also queer, in every sense of the word. The girls, and the boys, walked around holding hands. As teenagers. Same sex. Man, in retrospect those poor kids must have gotten the shit beat out of them. I wouldn't know. None of them were in the gifted program.

How hard would it have been to pair up some interested American kids with a Haitian "buddy" or two? We could have explained some things to them, maybe. We could have prevented them from getting beat up. Maybe. And we would have at least learned that they don't speak French in Haiti.

Ten years after graduation, on the day of our 10th year reunion in fact, I heard a Haitian guy my age asking about English classes at the Les Cayes community college where I was teaching. (It's okay; I wasn't teaching English grammar!) He spoke excellent English with an American accent and so I asked him where he was from. The U.S. He was in Haiti working for a program that helped Haitian kids raised in the USA repatriate back into Haiti. (Their parents didn't like the values they were growing up with in the USA.) "Where in the U.S," I asked. I had been in Haiti a while now; I had all the time in the world to stop and ask a total stranger all the intimate details of his life. He had not been in Haiti as long as I had and rolled his eyes. "Connecticut." "Oh, yeah, where in Connecticut?" I persisted. I was in dire need of any kind of entertainment. "Stamford" he replied. No way. "Westhill High School?" And now he got excited too. Westhill, it was.

He was from my graduating class in highschool, and not only had we never seen eachother before, we knew absolutely none of the same people. How sad is that? "Well, I kinda hung out with the people who really ruled the school," he said. And I thought, "Damn, all the while I thought I was the one doing that." Unbelievable. Two worlds. Living side by side and never even noticing eachother.

In the spirit of a true Haitian, I refused to let him stay in a hotel and invited him to my two-room tin-roofed hut with no running water or electrity. But we had a faucet in the yard outside and access to a neighbor's telephone. We might have had electrity sometimes too. But it almost never worked. He probably would have preferred a hotel, but the rum and cokes soon made up for my lack of amenities.

That's how I ended up spending my 10th year highschool reunion not with "gifted" lawyers and Wall Street bankers but with a member of my class who was a complete stranger to me. Something that should have happened in the past, happening in the present, for a better future. A great reunion in any tense.
Posted by Twintensity at 11:52 AM