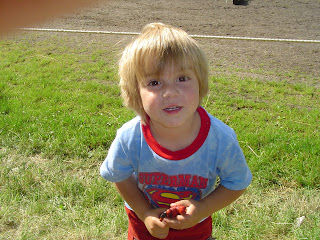 What still really gets me is that there is right and there is wrong. And I just don't understand why people are so afraid to stand up for it. Are they just too damn lazy, or busy, to bother? Or worse, do they really not understand the difference?

It's not just about Ryan and her walk to school, but we can start there. The other two mothers honestly don't seem to understand what all the fuss is about. The mornings work out fine with all three girls. So why not just cut out the afternoons and have them fend for themselves. This is their solution.

Why can't they see that I need help in the afternoons? Why can't they see that Ryan deserves to be good enough to walk with mornings AND afternoons? Why can't either of them see that Jule ignoring Ryan when Julia isn't there to protect her isn't right? I'm more disappointed in Julia's mom. Julia IS sweet and thoughtful and DOES stick up for Ryan. So, why won't her mother stick up for what's right?

I just don't get it. Our two girls could walk to and from school together just fine without the one causing the problems. So why, after over three years, is she still expecting me to put up with it? Why are we letting this mother get away with treating everyone else like their needs are of less value than hers?

It happens all the time. We know people aren't doing their part. We talk about it amongst ourselves, but then we continue to leave things the way they are. To be honest, we don't even talk about it much. Kind of hint at a bit of a problem and then laugh it off. Maybe bring it up generally. But never hold anyone accountable. People get away with things that are wrong. Is this just in the name of getting along?

Let's face it, in my day to day life as mommy, it's small things. And so I've learned to keep my mouth shut and play along. But, it's still wrong and....yeah....I was slowly dying inside at just accepting this and smiling along with everyone else. I won't make a fuss now. I am learning to bow out. But, damn it, I wish I could just understand how everyone else seems to just sit there and take it with a smile on their face.

And it does matter. The school system here SUCKS. I can say it, because EVERYONE AGREES. Parents and teachers anyway. The poor kids don't know anything else. IT IS WRONG. EVERYONE AGREES THAT IT IS WRONG. We bitch and moan. AND THEN WE DO NOTHING ABOUT IT. How can you live like this? I am not judging (anymore); I really want to know. There are things we can fix, problems we can solve, wrongs that we can right, if only we worked together and stood up for it.

Is it only Germany? God, I'd certainly like to think so, if only because it means that there are people out there who WILL fight for what is right and who WILL fight together for a common good.

I've got to move on. I've got to find the place where my voice is joined by others. I can do "nice" and I can do "getting along" but I've never been one to place much value on external appearances. If it's rotten underneath, I don't care how nice you've painted over it.

I'm not going to stop being friends with Claudia because she won't defend me and my daughter. She's a good person and a good friend. (I wanted to say true friend but I couldn't bring myself to do it.) She means well and she is protecting her own small world.

But I need people who will SCREAM AND SHOUT AND HOLLER AND FIGHT - or at least write and talk about - what is right. At least TALK ABOUT what they BELIEVE IN. Seems we don't even do that anymore. Does anybody still believe in anything?!

Some people are sure going to be disappointed that I've found myself again. (Most noticeably my father.) I was a lot quieter zonked out on the couch drugged out of my mind on medications that were supposed to make me be normal. I couldn't feel, I couldn't care. I just made it through the day.

If that's normal, if that's what everyone else is really about, then I prefer being insane.

Don't worry, I'll behave. I'll play the game and sit quietly, the same vapid smile on my face as everyone else. I'll make nice.

But underneath, I know who I am, and I know that I, at least, can make a difference
Posted by Twintensity at 9:40 AM