Fighting for the Prize 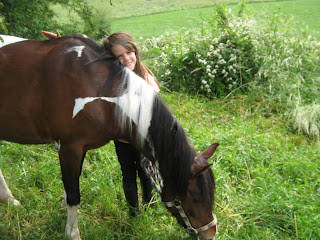 Written in response to Fatherhood Freestyle: You Are The Prize. By Dr. Mike McRae

My daughter, Ryan, has been walking to school with Jule and Julia since the first grade. I was so excited to have it work out. It meant that I was "integrated" into the community, that I was a "good" mother doing good mother things, and it freed me up from having to walk her to school in the morning myself.

Integrated, good and free. Me, me, me.

It has never been the best arrangement for Ryan.

Julia is playing with Ryan at our house as I sit here and write this. (Having valiantly tried to eat an American sandwich and soup for dinner.) Jule, on the other hand, has never been anything but rude from day one of first grade. Her mother, Heidi, is an equal bitch. (Jule is too young to be a true bitch and is actually very attractive, intelligent AND clever. She's just had to learn to take care of number one from an early age, poor thing.)

The first two years the three girls walked together, Jule's older sister Maya walked with them. Julia and Ryan would wait outside Jule and Maya's home while they got ready (they were often late) only to have the two of them run on ahead without even a word of greeting. This went on for two years, Julia's mom (Claudia) wanted to kick them out of the group, and I said, "Be nice." Be the bigger person. Don't make waves. BE NICE.

I am so ashamed. What have I been teaching my daughter about her self-worth?

Since the third grade, Jule (and Heidi mostly) have NEEDED us. Since Heidi is raising Jule to be independent and self-sufficient (meaning that she doesn't want to have to be bothered with her), Jule is consistenty late. She also cried when she came too late to the group meeting point and missed the other two girls. "Couldn't the mother help that poor girl get it together in the mornings?" we asked. But again, "be nice" won out. Ryan picks up Julia and then the two of them pick up Jule, still waiting outside in the dark and cold while she gets herself ready.

On the way home, however, when it is not cold and dark, and Jule has other, cooler friends she would rather be with, she leaves Ryan in the dust. She has also been treating her like dirt in school. In December, Ryan was so depressed that I had to have a talk with her teacher. (They don't help much here in Germany; the kids are supposed to work it out for themselves. Mobbing is huge and kids learn to take care of themselves first.)

Yesterday, when Ryan told me she had had to walk home alone again, enough was enough. I called Heidi and told her it just wasn't working out. One of the problems, besides the basic lack of respect for me and my child, is that the other two moms in the arrangement have grandparents who pick their daughters up after school a couple of times a week. That leaves Ryan with only one of them to walk home with. It also means they really don't need me, and my daughter, in the afternoons the way they do in the mornings.

I've been bending over backwards to "be nice" and to "fit in", but where is the concern for my needs? Or for Ryan's self-respect?

I'm very disappointed that my friend Claudia, Julia's mom, has decided to continue the arrangement with Heidi and Jule. All along, she has been telling me I was right and that she would stand by me, and by Ryan, in our decision. But when it came to direct confrontation today, she copped out. She tried to get me to compromise myself - and worse, my daughter, yet again. It has been almost FOUR YEARS. "But can't we just at least keep the morning arrangement going?" What, my daughter is good enough to pick everyone up at 7AM but not good enough for the afternoons when they don't need her anymore? "But isn't Ryan going to feel left out?" Well, she's feeling pretty left out already, every single goddamn afternoon.

The real feel good ending would be if Jule and Heidi got kicked out of the arrangement, had to learn a lesson, and became better human beings. It's the one I was hoping for. The real world ending leaves me driving Ryan to and from school alone and the other two moms trying to work it out. Noone is very happy with this arrangement either - including Ryan who likes walking to school with her "friends."

What am I teaching Ryan about friendship, though, if I allow this to continue? It's been too long already. "But Jule is nice to me if Julia is there." says Ryan optimistically. "Sometimes she is nice to me." She is thrilled with any crumb that is thrown at her.

I've taught my daughter to be nice (in a country that really isn't big into being nice to others).

It's time I taught her about what's right and wrong. (Integrating and fitting into into a system isn't all so great if that system is WRONG. And there, I have said it.)

And it is WAY PAST TIME I taught her self-worth. She is the prize.
Posted by Twintensity at 9:29 AM