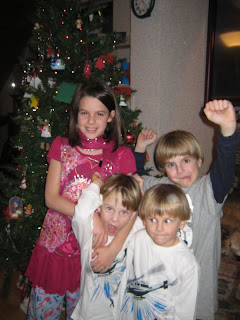 'Tis the week after Christmas
And what do we have to show for it?

Christmas Math:
1. Time to wrap the presents the night before : 3 to 4 hours

2. Time to unwrap the presents the day of : 30 minutes. (And that's with four kids, and two parents urging the 3 year olds to stop and BREATHE in between packages!)

3. Time kids woke up on Christmas Day : 6:30 AM (They slept together the night before to make sure noone would miss anything the next morning.)

4. Time mean old mom finally decided to let them come out of the bedroom : 7 AM

That's right. It took SIX HOURS to get from unwrapping to complete assembly. Now remember, we do have FOUR kids, but most of that time was spent on the Playmobile fire engine, which neglected to say at all on the box that there was "some assembly required." I thought I'd pull out a - well, a fire engine - and it came out in really little tiny Playmobile pieces. Most of which are already scattered around the kids' room by now. But I still love Playmobile, I really do. And the boys love their trucks (the ambulance was not half as difficult to put together). I'm just wondering what the point is in delivering them in little itsy bitsy tiny pieces.

On the other hand, after putting the fire engine together, Andrew's Playmobile fantasy dragon castle was a piece of cake. Too bad he hasn't looked at it since. Looks like Aidan and Matthew win out on that score.

For Ryan, it was the year of the scarf. After spending a good three weeks looking for one in Germany, she received the most beautiful matching shirt and scarf set from her auntand uncle in Texas. And then two more from my mother. All exactly what we were looking for - colorful and sparkly, which had been very difficult to find in wintertime Germany, or in Germany at any time of the year for that matter. Thank goodness the Americans are FINALLY accessorizing with scarves as well! Any chance we could get them to convince Europe that winter does not have to mean grey, brown or black?!

Then again, after seeing Ryan in the latest fashions, Damon has decided to search for a burka. Wonder if those come with sparkles too.

So everyone's in their new underwear and socks. New fashions from the other side of the Atlantic. (Except for Damon and I who are still in our pajamas.) Books are read. Ryan's crafts are finished and hanging from the wall. Andrew has already made it through his entire Star Wars Nintendo game. We've watched all the new DVDs, know all the AC/DC and Queen lyrics from our new CDs. (and one Elmo, but don't tell anyone!) And the Playmobile and Legos are scattered around the playroom.

'Tis the week after Christmas and what do we have to show for it?

Time the four kids have spent playing TOGETHER today: 12 hours.

They've slept together every night since Christmas Eve, two boys on the floor and one with Ryan in her bed, rotating each night. They've played Barbies, Legos and Playmobile, sometimes all three together. Today was an elaborate make-believe of Star Wars, starring Ryan and Andrew as Leia and Luke, and Aidan and Matthew as Han Solo and Chewbacca respectively. They've had birthday parties, run a grocery store and bakery/restaurant, all while coordinating an attack against the Death Star on the blackboard. Princess Leia even had Han and Chewie running around in drag for a while.

In the end it's not about the presents after all, it's about the incriminating photographs you get to take afterwards when the kids run around juiced up on Christmas magic.
Posted by Twintensity at 10:35 AM