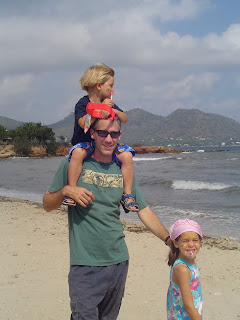 It has recently occurred to me that my family is speaking a foreign language here in Germany. No, not the German. Not even the Swabian dialect. It's the English. You see - not only have we picked up a rather Swabian lilt on the end of our sentences, but it turns out we are picking up English from citizens of the Empire.

No, not THAT Empire - Princess Leia and the gang have that in hand. I'm talking about the British Empire, a rather farther-reaching concept than most Americans take into consideration. Except for us tea-dumpers, the other corners of the former kingdom had gentler separations from mother England and still follow her customs and language to a closer degree.

It's bad enough that we're interspersing our sentences with Germanisms, but must we now start speaking ENGLISH as well?! Noone at home is going to understand us.

I remember the first misunderstanding clearly. We were still in Geneva, and another mom at the English playgroup sponsored by the American International Women's Club asked me for a "nappy." Well, sure I had a nappy. Sounded kind of like napkin. So I pulled out some wet wipes. No go. A burp rag? She looked at me like I was out of my mind. "A nappy, you idiot!" is I'm sure what she was thinking. I finally handed her my bag and she helped herself to a diaper. "A NAPPY!" she repeated, as if I was just a touch slow. Oh - a nappy. Why didn't you say so? She might as well have used the French word, for all that our two Engishes had in common on this one point. (I don't know what I would have done with "couche-culotte" but at least I would have known we were dealing with a foreign language.)

There are others. They unfortunately don't come to mind since I now intersperse them into MY American English regularly. I mean, it is pointless to ask someone if we should bring the strollers on our outing to the park, when the whole time she is planning on asking me about whether or not to bring the buggies. Come to think of it, OUTING? Is that even a word?

The latest example came from Damon last night when he was explaining some of his business details to me. (Or trying to: I admit my eyes glaze over no matter what language he discusses finance in.) Some company wasn't keen on the contract and they needed to renegotiate terms in order tha.....hold up, a minute. Eyes unglazed. Did my American husband REALLY just use the word KEEN in casual conversation?! What is this the FIFTIES?

Best part is he wasn't even snoggered!
Posted by Twintensity at 9:18 AM