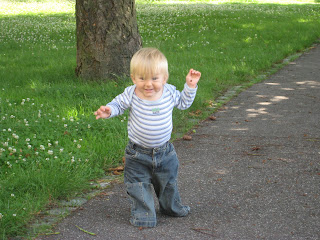 So far, we've had a fool proof way to determine where the kids have picked up their less-than-desirable vocabulary. The first swear word out of Ryan's mouth - at the age of three - was "Merde!" We thought it was really really cute; she'd used it appropriately, in context, as a crayon fell off her play table onto the floor. And after all, it was in perfectly pronounced French and sounded very sophisticated.

Aidan started a few months ago with "Scheisse!" Which, first of all, is used ALL the time by adults in Germany as an adjective, in everyday conversation, and even when speaking to children. Most often, something is "scheiss Egal" - which means, in more flavorful terms, that it's the same one way or another. But things can also be just plain "Schiesse!" - which translates neatly into the English "Shit!", something I like to think English speakers at least recognize as inappropriate for children's ears.

But since "Scheisse!", "Verdammt" and even the English "F" word (sorry, I just CANNOT write it out!) are used on German radio programs, TV, and by parents on the playground, it came as no surprise to me when Aidan came home having learned one of them in kindergarten. "Scheisse!" he whispered quietly, as one of HIS crayons rolled off of the (same) play table and onto the floor. Once again, proper context. But it doesn't sound half as cute, or cultured, in German as it does in French.

The greatest part, besides the obvious imitation involved, since he showed no signs of distress or anger, was that he also mispronounced it in a really cute, softened way. It didn't come out in the harsh German way but rather in a slow, gentle, almost soothing "Scheizzzzzze" , with a softer American s to z sound, almost like he was snoring in between. And besides, it wasn't MY problem.

When his teacher talked to me about it at kindergarten a few days later, I said the same thing. Nice try, blaming it on the parents at home, but if he isn't swearing in English, then it's actually proof that you guys need to be working it out with the older kids in kindergarten. And with THEIR PARENTS and THEIR home environment. Oh. And by the way, isn't it cute the way he mispronounces it? Haven't heard from the kindergarten since.
Posted by Twintensity at 12:35 AM