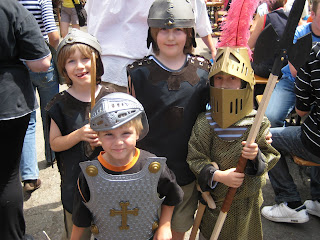 At first I was angry. But now I really want to know and understand.

What made that man who pushed in front of my family at the restaurant on Sunday (who knew you needed reservations at Wienerwald?!) so certain that his needs were so much more important that ours?

I honestly feel that this question lies at the heart of the human condition. It is the reason the mice built earth in the first place. (You would have to know - and appreciate - The Hitch Hiker's Guide to the Galaxy series by Douglas Adams to understand that last bit, but it is my blog and I am feeling quite clever, so I am leaving it in.)

What made this man feel justified in placing his needs before ours? Did he feel we were less important, less worthy, less hungry, stupid for waiting? How could he smile at us when we were seated right next to them less than a minute later? He showed no guilt, no shame, no remorse.

Does he not have a conscience? Assuming that he does, how is it that it can work so differently from mine? Does he lack respect for, or awareness, of anyone besides himself? In the extreme, this is considered a psychopathic disorder, this ability to not feel for anyone else.

Just as disturbing to me is the large number of people - the hostess and wait staff, the other customers and HIS WIFE - who also saw it, rolled their eyes and then did nothing about it. I might be able to understand the staff, who have jobs to protect. Even the wife, although Damon will confirm none to happily that I do scream and yell and make a fuss when I feel he is being rude to someone. (In his defense, he is usually standing up for us.)

I am tired of having to defend myself constantly. It's not only Germany - two people cut in front of my sister at the deli in Arizona the other day. And she is nine months pregnant. (Not only is that rude, but downright dangerous!) But it does happen here a lot more than I remember in any other country I have lived. (One positive thing to come out of the earthquake in Haiti is the pictures and stories of neighborhoods and strangers helping eachother in spite of their own dire need.)

Since Sunday I have also had to fight for my spot in a step-aerobics class on Monday night, and this at the local community center where everyone knows eachother! The interesting part is, and what I find different from the USA, is that when you stand up for yourself, the offending person backs off immediately, with a smile. There are no hard feelings. It's as if they know they are wrong.

It's almost as if, in the USA, the people who do things like this truly ARE assholes. You call them on it and they are ready to take you on. It gets ugly. Here, people just seem to do it without thinking. It is part of the culture. (Although I still think this is a really lame excuse.) They aren't assholes. They are actually NICER to you once you've reprimanded them, kind of like children caught with their hands in the cookie jar who then try to make nice to the person who caught them.

Often they act as if they just hadn't noticed you standing there. In front of them. Which is just as disturbing. (Or sometimes, that they just didn't know you spoke German, but that's another topic. I do think they expect the large number of US military here to just give in, and I think we do, just because we are so shocked people can be so openly rude. IBM and the military actually have manuals on how to keep your place in line here!)

German tourists in Disney World, Florida, have the WORST reputation as being assholes. Before I knew this, I was on line in Disneyworld with Damon and his mom and stepdad when we noticed some people casually cozying up to the side of the line, obviously trying to avoid the hour in line the rest of us had already waited. When they quietly moved to stand in front of us, and I confronted them, they pretended they didn't speak English. Boy had they picked the wrong person to stand in front of! I let them have it in German. Japanese tourists and American visitors alike clapped and cheered as the Germans moved to the end of the line.

It's not just a German thing, but it really does seem to be more prevalent here and I think it is something that should be addressed and not just written off as part of the culture.

But I'm not going to accuse, or overanalyze, or trumpet my shiny moral horn today.
Because I still need to understand.

How can someone be so sure that their needs count so much more than those of others?

Please, it's really important that I understand this.
Posted by Twintensity at 1:07 PM