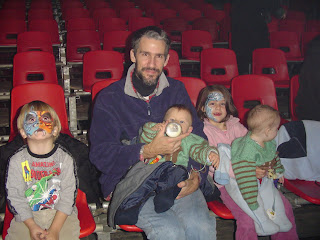 If someone gave you $300 to prioritize what in your luggage is of most value to you, you'd do it pretty quickly. I had five minutes to open up my suitcase and make it ten pounds lighter or I would be charged that much in overweight fees. From 60 pounds down to 50 pounds, with a line forming behind me and the plane already at the gate. Piece of cake. I'd been through worse than this before.

The toiletry bag was on top. Heavy but not heavy enough. Books for the kids - I could carry them in my arms if I had to. Grandma's sweaters. I could wear a couple and wrap one or two around my waist. Sandals would be tougher. More books. I was underweight. Sandals back in.

I have a hard time getting rid of things I might be able to use again. But the $300 made it a no-brainer as I chucked face soap and tonic, an almost empty jar of moisturizer, a full bottle of hair gel that I never ever ever ever use, a five year old tube of sunscreen and the half-full bottle of contact solution in the trash on the way to security. I hoped they'd let me keep my perfume. I really like it.

But honestly, hair gel I never use and an almost empty bottle of face cream. What the hell am I thinking?

I happily tucked the children's books into the now almost-empty toiletry bag, threw on one of Grandma's sweaters, wrapped two more around my waist and marched contentedly through security.

My need for stuff, for almost-empty toiletries and hair gel that I might just one day decide to use, is a need for security. I want to be sure I have it, that I don't need to run out and get it again. I do the same things with the children's art supplies, or with the medicine cabinet. As if the walls will crumble if I don't have enough sparkly glue or glitter on hand on any given day. As if I'm not going to go to the doctor for a prescription anyway if the kids have anything serious enough to warrant me bothering with any sort of medication.

This has to stop now.

We've all heard that we can't take it with us. Not even if we pay $300. And yet we still hold onto it, out of fear, out of insecurity, out of a need to define ourselves by the things we surround ourselves with.

Of course it's all an illusion anyway, as demonstrated by the millions of Americans who have lost their homes and their retirement savings in the last two years. As depicted even more graphically by the Haitians who have lost everything they had in the earthquake. Really puts my half-empty toiletries or glitter glue supplies in perspective doesn't it?

We're planning a pretty big move, to another continent, in a few months. The mantra has been ''If it ain't worth the cost of freight, then its time to say good-bye.'' It is easier said than done, especially when it comes to children's things. We want to give them everything. What happens if we get rid of the bikes and then can't afford new ones right away when we get over there? What happens if we can't give our children everything?

What happens if we give up everything we have and start over?

I'm terrified, I really am. Not of a new continent, but of going over there with nothing.

As a Peace Corps volunteer in Haiti fifteen years ago, I would pack a small sundress, two pairs of underwear, some sunscreen, bugspray, water and a flashlight and head off into town for an extended weekend. I didn't need things to know who I was.

As I buried myself under children and the possessions that accumulate with them, I lost sight of that. I traded adventure for security. I gave away the moment for the future.

I don't need $300 to know what's important to me. It's time to rid myself of empty baggage and travel light. When you think about people who really have lost everything, you realize that what's really important doesn't fit in a suitcase.
Posted by Twintensity at 1:55 PM