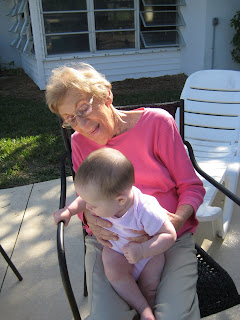 ''There you are.'' Grandma greets me at the door. I'd flown out of a blizzard in Germany, catching the last flight out into Paris. From there, I'd flown into a snowstorm blanketing most of the United States, spending an extra twenty-four hours stranded at the Atlanta airport. Logistically, I had no right to be where I was. And yet here I was.

Home. I'd been having a hard time finding out where that really was. Despite all of the introspection, or maybe because of it, I'd been missing the point entirely. Home isn't about where I am from, but about who I am from.

There are bits of me all over Grandma's house. I see myself in the five shampoo bottles she has lined up on the shelf next to the shower in the yellow guest bathroom. They are remnants of what my family brings with them on visits, but declines to take home. The Freeman Botanical Hawaiian Ginger has been there close to twenty years. I have a hard time getting rid of things I might be able to use again too. Especially if I can line them up neatly on a shelf instead.

My mother wouldn't understand this.

I see myself in the piles of newspapers she has lying next to her favorite recliner, the one she bought for Grandpa before he died. She'll get to them later. And in the unfinished hookrug she is making for cousin Lisa's baby.

''Can you believe I have all this stuff to sort through?'' She apologizes for the basket on the floor next to the newspapers. It's full of old magazines, advertisements, Christmas cards, some free socks and a bottle of hand lotion. Believe it? I am it. What a relief. Here I am.

Grandma's kids, my mother and her siblings, want to know if I think Grandma's losing her mind. She does forget what's in the refrigerator two minutes after you've told her, and she can't hear her alarm in the morning, but other than that she seems to be fine. The alarm is waking me up early enough to greet the Florida sunrise and there's always sure to be fresh fruit lying forgotten in the refrigerator. I am pleased. I tell them I don't think she's losing her mind any more than I am. Which doesn't seem to reassure them.

''Hello? Mom?'' Aunt Diane calls to see how we are. ''Nope, it's Christine.'' I reply. ''My goodness. You sound exactly like her.'' she says. I am her. But Aunt Diane wouldn't understand about the shampoo bottles either.

My mother tells me Grandma has a hard time understanding that my sister's cell phone isn't a landline. Grandma doesn't seem to get it that she can call my mother's cell phone just as easily as Laura's when she is out there to visit. I laugh. The next day I look up Laura's number in Arizona and call her on her cell. Trying to reach my mother. Who's laughing now?!

Which isn't to say that Grandma and I are exactly alike. ''How old are you again?'' she asks. I didn't fold the sheets down on the bed correctly. ''When I'm with you Grandma, I'm about seven or eight.'' I reply. Later, I grab a plum out of the kitchen and eat it. ''Oh. I hope you washed that.'' she says. ''Of course I did Grandma. Sure I did.'' She sighs. Some things never change.

Home is Grandma. As a kid growing up in Germany, I couldn't wait to spend the summers with her in Connecticut. It was a magical place. She and Grandpa lived in a sprawling two-story colonial with rose bushes out front and a couple of wild acres out back behind the in-ground pool. There were treasures in the attic and mysteries in the basement. It was the house of my dreams.

It almost broke my heart, and hers too, when she and Grandpa moved to Florida when I was fourteen. How could she leave that house? It was weird to visit her in a two-bedroom bungalow, where everything was new and had its proper place.