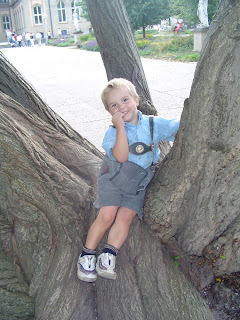 I gotta be honest here; coming back from Florida SUCKED. I had two weeks with Grandma, in my own bed, in my own room, with Grandma's caretaker (Jenny!) making meals for us. I ran on the beach. I went to a nature reserve with Uncle Doug. (And a gun shop - but that's another essay!) I went shopping with Aunt Joan. (I really love Walmart and Bells.) I went sailing with Ray and Patty. And I got to sail. I bought a Netbook and figured it out myself. I wrote. Or not. Whatever I wanted, when I wanted.

Oh yeah - there was also the sun (although it was cool, it was still sunny and nothing compared to winter in Germany.), the beach, the wildlife, the nature, and all of the friendly Americans. I'd forgotten about that. Do they ever stop smiling or asking you how you are? Where you are from, what you are doing here, and the rest of your life story as if they really care about you? What about all those polite people in the stores helping you out with a smile, anticipating your needs, acting as if they really wanted to be there, with you, helping you shop? And everyone holding open doors for eachother? And looking eachother in the eyes? Direct eye contact and friendliness. Really really nice.

So that I was less than thrilled to have to come back to reality.

I'm making a point to notice the friendliness over here too. Okay, it is definitely more isolated, certainly NOT a cultural phenomenon, but it exists and we need to notice it exists so that we can nurture that small spark into a larger flame.

One interesting thing is that Germans are friendlier in America than they are here. So that not noticing that other people exist around you is not a genetic deficiency inherent to those of German descent. (And, let's face it, a large part of Americans are of German descent.) America's friendliness infects them too. I not only had eye contact and conversation with a German man in his thirties at the departure terminal in Atlanta, he kept it up well into the flight, his sparkling blue eyes glancing a few rows back at me every few minutes to confirm that the two of us did, indeed, both have an entire row to ourselves. He just kept winking and smiling.

I also helped an elderly German woman who had been visiting her friend in Florida for a month. And heard all about her grandkids and her home in Munich.

Then there's the older gentleman who I passed as he was coming out to get his morning paper. HE greeted ME and then commented on the chilliness of the weather. (For those who don't know; this is how strangers pass eachother in America; it's hard for us NOT to make a connection with someone.) When I replied that this was nothing compared to Germany he delightedly replied that he was German too. Then proceeded to tell me about his first business in Canada, a relocation to California and how his daughter now lives on the neighboring island with her two kids, ages 2 and 4. Within thirty seconds.

Okay, this last guy wasn't German anymore; that's what you call an American who was born in Germany.

Or Michael at the DAZ, who I called up today for some brief information and who I ended chatting with for ten minutes. He spent three years at Cornell, most recently three years in El Paso Texas, has worked as a journalist, has two children and was most impressed that I had a "real" job as a veterinarian, even thought I am currently not practicing. What a nice guy. German. Although obviously an odd one! (Which is obviously meant as a compliment!)

It's not easy here. It is cold and it is gray and everyone is huddled up in their own misery.

But not everyone. The check-out ladies at Real in Stern Center are mostly really nice. And that guy I literally almost ran into coming through the door - we were in hysterics together.

Okay - he wasn't German. And the checkout ladies might not be either. But Michael is. And the little old lady from Munich. And my winking guy on the airplane.

We aren't going to notice them unless we look.
Posted by Twintensity at 10:59 AM