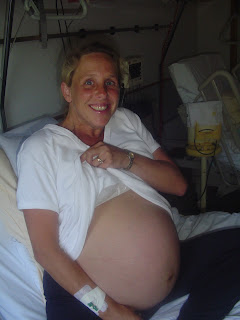 ''What is the address you are calling from?'' I'm doing three things at once, talking to the 911 operator, running outside to get Doug and Ray before they take the boat out, and reassuring Grandma that everything is going to be okay. She's already passed out in her chair so I concentrate on getting the address correct. ''And the phone number you are calling from?'' I am surprisingly clear-headed. When she asks me why I called I tell her that my 91 year old Grandmother has collapsed. My voice catches but my body still knows what to do. I cradle Grandma in my arms – she is so tiny now that it is like holding a large child – and keep her head up. The 911 operator wants more information but she reassures me that she has already sent the ambulance. This is Florida, the retirement center of the world. Her finger was on that button the second I mentioned the words 'Grandma' and 'collapse'.

I know Grandma is afraid to die. You'd hope that getting older would prepare you for it, but Grandma is not an adventurous soul, not big on change and surprises. She's a devote Catholic and knows with certainty that there is a God, that Jesus died for our sins, and that there is a heaven waiting for her. If only Jesus had left directions on how to get there. Something more concrete than lead a good life, be good to others, commit no sins, and pray for forgiveness. Something more along the lines of

''When your soul leaves your body and you are looking down at your granddaughter cradling your head in her arms, take a sharp left. Head straight until you hit the Elysian Fields. They will be properly labelled. You can't miss them. Take a second left at the tunnel entrance and keep going until you hit the light. You will receive further, detailed instructions at the light. There will be someone there to assist you further should you have any questions.''

Grandma would still be worried, but she'd be so focused on getting the directions right that she'd be less anxious about the final destination.

My biggest fear is that Grandma will think she's all alone. Doug and Ray and I were supposed to be taking the sailboat out this afternoon. ''It's alright, Grandma. I'm right here with you.'' I say. Ray nods in approval as he checks her pulse. He's been through this with both of his parents already. Doug is outside waiting for the ambulance. I imagine Grandma's consciousness might be locked up in a sensory deprivation box the same way mine was the first, and last, time I inhaled nitrous oxide. If it is, then she is feeling scared, and I just want her to know that I am there for her. It doesn't occur to me that I couldn't hear anyone in my black box. Although I don't believe in God, or heaven, I have no doubt her consciousness is around here somewhere.

The paramedics come and load her onto a stretcher. There are about eight of them. And a fire truck and some police officers. Had I mentioned that Grandma passed out and now we were going to set her house on fire?

In the end, this is not the end. Grandma's soul does not take that second left at the Elysian Fields. Soul and body are coming home tomorrow.

For the record, Grandma never saw a tunnel or a light. She didn't look down upon her body from on high. But then again, she never did stop breathing either. (My Dad, a confirmed atheist, was really bummed he didn't see anything when he collapsed fifteen years ago. He had stopped breathing. He's been threatening to sue the lawyer who resuscitated him ever since.) Grandma doesn't remember anything I said to her as she lay in my arms. But Ray appreciated the sentiments.

Throw out the damn road map.

If we don't accept and embrace change and uncertainty as a part of life, it is going to be damn hard to meet the biggest change of all with anything but fear, dread and uncertainty.
Posted by Twintensity at 11:01 AM