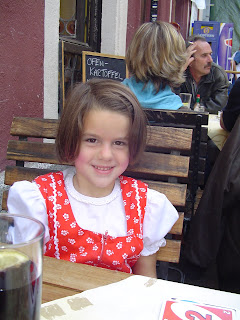 I hate it when someone else has the same thoughts as I do and writes them down just that much more succinctly.

Here I've been bitching and moaning and psychoanalyzing myself for a year.

Why don't I fit in? Why I am different? Why is it just so damn hard here?

And then I read Stefan Theil's piece in last week's Newsweek (March 15 edition, Waiting for Merkel) and he sums it up in two sentences.

Okay, he's talking international politics and I'm talking personal fulfillment, but I think we're both on the same page.

"Over the two decades since its reunification, Germany has turned into a sated and inward-looking power concerned more than anything with preserving the status quo. Merkel has become Germany's most popular leader since World War II by promising Germans continuity, and won reelection in September 2009 on a platform of avoiding change and reform."

Thanks for waiting with that bit of insight, Stefan. I would have been a boring person without all the inner turmoil and conflict.
Posted by Twintensity at 3:13 PM