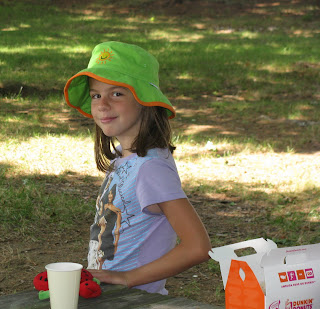 I finally have a meeting with a school counselor on Monday to go over the results of Ryan's test scores.

But I don't need a test score to tell me that she doesn't understand basic concepts. She has done phenomenally well in school for a child that obviously doesn't have a clue as to what it's all about.

What a brave kid. She has been following the rules as best she can without really knowing why. Pretty smart to be able to cover up as well as she has been able to.

Little things give her away. Things that the teachers don't bother to pick up on. She has average scores and that's good enough for them.

But just LOOK at the work, ladies, not at the final grade.

Circumference for example. She is busily, and happily, counting the squares AROUND the shape, the way she thinks she has been taught in school. Not realizing that she is, in fact, supposed to be counting the lines and boxes that make up the outside of the shape - ie, the basic concept of circumference - but actually counting the entire row of boxes SURROUNDING the shape in question.

The entire CONCEPT of circumference eludes her.

But I keep getting told that I'm expecting too much, that I am overambitious and that not all children are the same.

Well, yeah, but... is it expecting too much for them to be able to tell an eraser from a school bus?!

Im frightened. Not that my child has a learning disability but that none of her teachers seem to care.
Posted by Twintensity at 3:07 AM