I'm going through my writing this morning, making sure everything is loaded onto the laptop before the desktop gets packed up on Tuesday. I never DID translate this into German and send it to the publication it is addressed to. But I'd like to share it with other parents schooling their children in Germany before I defect to the Australian education system. The editorial was a well-written, humorous glimpse of life as the child of an educated, literate German couple began school. These two parents, themselves schooled in the system, had the same difficulties facing many of us. THEY got a 3 on the reports and homework assignments they were doing with their child. (The equivalent of a "C".) Mostly because they had a hard time figuring out what was expected. The piece was tongue-in-cheek, that two educated German parents couldn't pass third grade here in Germany today, but did address the basic problem I see in the system: the fact that parents have no inherent right to participate in their child's schooling, in fact are mostly discouraged from participating (which is considered interference in what should be the teacher's affair) at all. This was written in early June. Here goes: 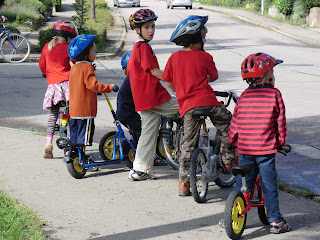 I was thrilled to read your editorial addressing schooling in Baden-Wurtemburg. I, too, have always believed that schooling was an activity for the entire family. I too laughed at some of the apparent silliness inherent in the system here. But the humor hides a problem that needs to be addressed.

You see, we are not the only ones who are having to provide our children with what amounts to home-schooling because of an inherent failure in the system. There are too many families out there struggling to help their children learn, without adequate help from the very system that is supposed to be teaching their kids.

Parents should – and need to be- involved with their children's education. But that is made almost impossible here by a system that doesn't encourage active parent involvement. Two Parents' Nights a year are not enough. Unless I push, or cry or threaten or scream, I have a total of ONE personal parent-teacher interview IN TWO YEARS. Do I even need to say that this is not enough?

The teachers try to reassure me that no news is good news, that if something is wrong, they will come to me. But that is not true. If I hadn't made waves myself, I would never have spoken to my daughter's teachers. And they still haven't recognized her learning disability.

The first problem I would address is the one of communication and cooperation between the teachers and parents. Pay the teachers more. Extend their hours. Do what you have to to allow (encourage, DEMAND!) the teachers to communicate with parents. Teachers are public servants of the state. Currently, this makes them immune from their responsbilities to us and our children. They are protected from having to produce acceptable results. Make the school system answerable to the parents, not other way around.

Is it really humorous when your child comes home with absolutely no idea of what is expected on the homework assignment? And when the phone calls begin and it turns out that no other child in the class seems to either?

We, as parents, need clear, written expectations for the school year. We need to see the goals our children are expected to achieve, the benchmarks that are being used to measure that achievement, and the programs in place to help those children who aren't meeting expectations. (Or those that are overshooting them.)

And we need regular, personal parent-teacher meetings at least four times a year. For children who are doing well. More for those who aren't.

It is a lot to ask. It is a lot of work and a lot of time. It will cost money.
But the current system, where parents are left floundering on their own, thinking they are alone, is not working.

YOU ARE NOT ALONE. It is silly that so many of us are fighting the same battle individually, privately worrying about what we've done wrong, wondering how we can do better, where we can get the help we need. WE ARE NOT ALONE. And we can work together – WITH the schools and with the teachers – to get our children the help they need.

Schooling is a process that should involve the entire family. Parents should have the right for active involvement in their child's education. This can't happen without communication.

I personally believe it is a problem of perception as well as of cash. I have continually heard from my children's teachers that schooling is their concern and not mine, that school problems are their problem to deal with at school and that I shouldn't have to concern myself with them. It is well meant, but wrong. I have also heard that all children develop differently, that not all children are the same, that I shouldn't expect too much from my child, that I am too ambitious. All answers designed to reassure me – and keep me out of what they consider their business.

Except they're my children.

Why did I not hear from the teacher when my daughter had been doing the homework incorrectly for two weeks? Why didn't I know that my son had been having math quizzes every week until five weeks later? Why isn't the homework corrected? (Especially if they're telling me that I shouldn't be doing it with them myself at home.) Why is the classwork often wrong? Why are my children sometimes released early from school without my knowing about it? Why do I have absolutely no idea what is going on at the school? These are all problems of communication. And problems we, as parents, are encouraged to overlook and accept.

Working together, cooperating and COMMUNICATING, schools AND parents, can achieve so much more.

I give Baden-Wurtemburg's school system a 4. (I believe Germany's PISA scores are similarly low.)

Is this really the best we can do for our children?
Posted by Twintensity at 12:40 AM