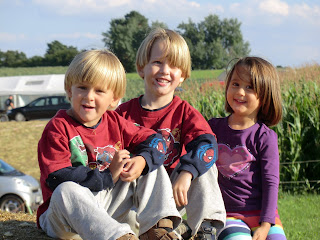 I had a chance to be a bigger person again last Saturday. (I have been meaning to post this for over a week but haven't even had the chance to turn on the computer.)

As we came back from the sunflower maze Aidan found an ID card lying on the front step to our apartment. It was one of those employer cards that you need to get into the building, or to buy lunch, or something similiar. And it obviously belonged to the nasty couple downstairs, who had once again closed the front door in my face as I was unloading the twins out of the Chrysler.

Did I do the proper thing and knock on their door to return it to them, proving, to themselves and to me, that I am a bigger person, and perhaps allowing my generosity to affect them and allow them to grow into better people themselves?

I most certainly did not.

Aidan is carrying it around the apartment as I type.

I get an evil joy inside me at the turmoil the loss of that card created downstairs. The futile search, the acrimonious accusations. THEN the hassle of calling it in and replacing it.

Honestly, all they had to do was be even halfway semi-decent human beings and they would have had their card.

And honestly, if I was a better person, they would have their card despite the fact that they aren't.

I like to think of myself as an agent of the universe, allowing things to work out as they should. What goes around comes around. Karma. Just desserts.

If I were still a practicing Catholic, I'd go to confession, say a couple of "Hail Marys" and be done with it.

Except I think you're supposed to be truly sorry for your sins.

And I'm still busy getting a big kick out of the whole thing.

Oh well. In the end, I'm only human. And still working on it.
Posted by Twintensity at 12:36 PM