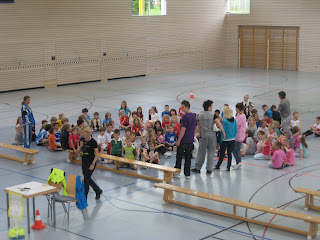 I'm a little afraid of how easy that went.

Because that either means something ELSE - like Youth Services - is going to hit me over the head next week.

Or that that quiet little principal I've been trying to give the benefit of the doubt to is quietly trying to control my personal life WITHOUT state authority.

It WOULD explain why the school has been so unhelpful and apathetic to my child's needs for four years. She is running her own little private kingdom according to her own private rules and viewpoints.

She hid in her office this morning while I spoke with the school secretary. A very very nice lady - also someone we know from around town - who was speaking into the phone as we entered with such a strong Swabian accent that Damon and I both wondered what the heck we were sending the kids to school there for in the first place! But nice. And the academics have been okay as far as it goes. It's the SYSTEM we can't stand. Not the people.

Except that, after all this bull@^$& over the phone for the past few months about Schulpflicht and what I HAVE to do with Ryan, all we did was write a hotel address on a piece of paper and make small talk. So that my rage yesterday was actually justified since we DIDN'T have any official paperwork to fill out after all.

Stop treating me like a child. Stop telling me what I HAVE to do. I am an adult. I am totally able to take personal responsibility for myself. AND for my children. 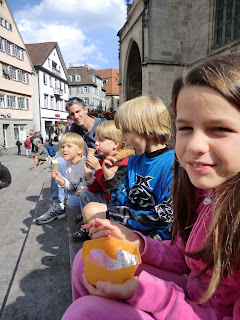 I also felt perfectly justified in giving them a hotel address to fill into their slots. After all, all they ever did for Ryan was worry about checking off the proper box on that form too. If what they want is neat paperwork, then I am willing to comply. Alles in Ordnung. Although perfectly meaningless and pointless.

That's it apparently. Unless they are planning on sending Youth Services after us on Monday when the kids don't show up at school.

When the Jehovah's Witnesses showed up again yesterday I honestly wondered for a moment if they weren't just a cover for Youth Services checking up on us to see if we really are moving.

I know. Conspiracy theories. It's time for me to leave!

What disturbs me isn't just the absolute authority the state has over our individual lives here, but the personal authority individuals take on themselves. Individuals policing eachother, telling eachother what to do.

What does the principal REALLY need to know other than that the children are being raised in a loving family - and moving soon? As long as they aren't being beaten or locked in a closet or being otherwise threatened in our home what is it to HER how we are raising them, what our personal beliefs are, what values we share?

There was no reason we had to go in there today except to fulfill her personal desire for power over others.

Stop treating me like a child. Stop telling me what I HAVE to do. I am an adult. I am totally able to take personal responsibility for myself. AND for my children.

Yes, I repeated that twice on purpose.

I'll be the first to argue that, in her defense, she is doing what she feels is right. But why are we so quick, as humans, to decide what is right for everyone else? Why do we have to enforce our own personal beliefs and rules onto others?

It's not just Germans. But boy have we perfected it to an art form.

I told the secretary about our personal plans. How the children and I were enjoying the English lessons and math review we have been doing at home during the summer. (No, I was NOT dumb enough to call it home-schooling while in a German public school!) How the twins were carrying their shoeboxes around the house and pretending to be packing.

I mentioned the world map on the living room wall where the kids have all learned to trace our route through Europe, over Asia and into Brisbane. (I didn't mention the direct route since watching the video of the little boy being forcibly removed from his parents' custody as they were leaving Sweden to homeschool in India. Paranoid? Perhaps. Watch the video though and see if you wouldn't be worried too.)

And how I would be able to work as a veterinarian again because the kids would be in all-day schools. And, since she asked, yes the twins would already be learning to read and write in kindergarten at the age of five. 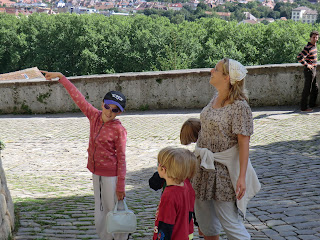 I mentioned the stability of our family, even as it travels. And she, like most everyone else in Altdorf, knew about the dog. It's a small community. We are the ONLY Americans in our six years here to have at all made an effort to become part of the community. (There have to be at least ten to fifteen military families here but, other than knowing where they are housed, noone knows a thing about them. Another essay here but the American military as a rule certainly doesn't integrate into the communities they believe they are living in.)

I didn't gloat. But, since she asked, I hope I made it clear (mostly to the principal listening in through the open door) that THERE are lifestyle choices out there that DON'T follow the status quo and STILL benefit the children.

I CAN give my children the world.

And I DID apologize for my outburst over the phone yesterday. I explained that I consider Altdorf my home. That it is my roots more than any place so far. That I love and respect the friends I have made here. And the town itself. But that I myself left Germany - with all the rules and 'have tos' that I LOVED as a child - and was raised in the USA. I have seen other systems. I know something else now. And I, as a child of the world, cannot come to terms with the constraints of the German system.

She nodded her head. Either she was being nice, she understood, or Youth Services will be showing up at our door on Monday. (Hmmm - might be a good morning for a trip into the Tuebingen museum that day after all!)

"Individuals are one thing," she said. "It's the SYSTEMS of people that are hard."

So that - hmmmmm - I believe I may have learned something from the German school system after all!

"When your children are young, give them roots. When they grow older, give them wings." A Hindu saying I actually first heard here in Germany.

My roots - and part of my heart - will always remain with my community in Altdorf. It's where I raised my children, gave birth to two of them, and found myself in the process. It may not be home, but it is where I am from.

It is where I learned that I was meant to fly. 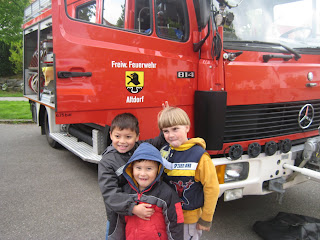 Posted by Twintensity at 2:59 AM