Just Us! Life at the Connor's 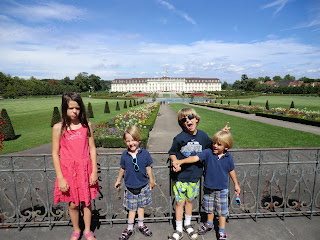 I have been scribbling away like crazy but haven't had the time to form a coherent sentence.

Or turn on the computer for that matter.

But since I promised some family updates, and haven't delivered...well, here goes.

The kids are great. Ryan is at riding camp this week. Where she shines. It is so nice to be able to drop a child off in the morning knowing she is somewhere that is actually good for her. (I would personally NOT be ABLE to send her to school next week. I just couldn't do it.)

The twins are in morning kindergarten again. Aidan got beat up by Luka yesterday and was afraid to go back this morning. They had to ice the back of his head where he fell so I am fairly certain he was not the aggressor and even more certain that he lost! But Matthew has been strutting around with his chest in the air telling everyone how he stepped in to protect his "Bruder." And Andrew offered to go in and have a "talk" with Luka as well. I told him that was probably more muscle than we needed for a four-year-old! Poor kid. Although I do like the Connor Bros sticking up for eachother.

The homeschooling is going really well. I'm learning more than I ever imagined about teaching and learning. As a bonus, the kids are learning something too.

We've been going easy on the math since I discovered an online review course I really like. (www.ixl.com since someone will ask!) It covers the basics of an American curriculum so that I know where the kids stand - predictably enough ahead in some fields and behind in others - and we can review what we need to before letting them practice on their own. (It also allows me to work out in the morning while they are on the computer! I'm telling you - the flexibility is AWESOME!)

English is a piece of cake. Since we can talk about piece and peace and other homophones all day. And learn about all the silly things English does with an 'e' at the end!

We read "Alexander and the No Good, Terrible, Horrible, Very Bad Day" to learn about synonyms. (I do like to hit them over the head with it sometimes!) And remembered the book was about moving to Australia too!

Then we read whatever we like - or write a letter - and go over the funny things English does with words. I am proud to announce my kids now spell 'ov', of and 'vor', for. 'Where' WITH that silly silent 'e' - some of the time! And at least KNOW that to, too and two exist....although where and when isn't always clear.

These are German-schooled kids so they are just soaking up all the rules those of us brought up in English just took for granted. It's fun to see the leaps and bounds.

Moving is going well too. Wolfy is still the biggest issue. The family who was interested in taking him is now expecting twins. Honestly, if anyone is trying to conceive and having problems, I suggest they take our dog!

Aidan and Matthew "move" every afternoon. Carrying things around in bags or shoe boxes. So no, I don't think they are too stressed about the whole thing!

So that look - I've managed to fill up a blog with no crazy moral message or silliness, just a peak at what's going on in our lives.....
Posted by Twintensity at 2:50 AM