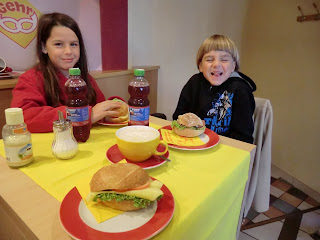 People keep asking how the home-schooling has been going. Sporadic the last two weeks but totally fun and interesting.

Only at home can you take a lesson plan on Australian history and then move with it into rugby and that awesome New Zealand haka!

No, Anita, I refuse to believe I could ever feel any animosity towards South Africa. Although we will kick their butt in rugby. A very big "we" since I haven't even reached the country yet and have only seen enough rugby (mostly the New Zealand haka to be honest with you!) to know that I would prefer my boys to stick with soccer. Honestly, all I know is that the Germany flag is coming out for the WM in four years. I gotta have SOME loyalties, no matter how mixed up I am inside about who I am and where I come from!

And cricket. Don't even go there. The baseball equipment is already packed and ready to go!


Ryan and Andrew and I went into Tuebingen yesterday to check out the museum in the castle. It is only open on weekends and Wednesdays. Lesson one from homeschooling: check the schedule. Except that lesson two was better: forget the curriculim and do something better!

Poetry and songwriting at a breakfast cafe in Tuebingen. Polished up at the Tuebingen library. (Such a cultured bunch. I just had to show off!)

Andrew took his idea and ran with it. He had people laughing in the streets. LOL even.

Ryan. Well. I think we went too fast for her. She shut down. I did write down her words. And maybe, just maybe, not everyone WANTS or NEEDS to be the center of attention. Hard to believe in any child of mine, but there you have it.

We compromised and this is the result. To be fair, she wanted to do a photo essay with it. (Shades of Karenne.) But the twins were coming home in half and hour and we were running out of time. I'd like to do the photoessay with her another time.
I think it's pretty clear that her interests and talents lie in the visual.

We're generally having a blast though. A whole new world opens up when you throw away the rule book for a while!
Posted by Twintensity at 2:27 AM