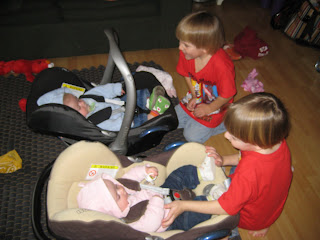 "What IS it about Aidan and Matthew that all the other kids can't stop raving about them?"

"All my son talks about is Aidan and Matthew."

"What are we going to do without Aidan and Matthew in the kindergarten next year?"

"My son has asked for a sibling so that he can be like Aidan and Matthew."

What IS it about twins that has us all so fascinated?

Even twins themselves. My two LOVE it when they see a pair of newborn twins in a double stroller. "Twins. Twins. Like us." they whisper excitedly. They followed one unsuspecting grandmother around a playground last year. My two tiny stalkers.

When Gaetan, Claire and Chloe brought THEIR Aidyn and Mia to visit my two each claimed one for their own. Aidan got Aidyn. And Matthew got Mia. They were so pleased.

The kids in kindergarten clearly sense that something special between the two of them. I'm getting complaints from the mothers that their single sons are asking for a brother, just like Aidan and Matthew have.

I'm not sure how it is with boy-girl twins. Or identicals. Two girls. But I do know that my two little men - with entirely different temperaments - still have enough in common with that Y chromosome and shared age - that they have a best bud to knock down, roll around and generally have punchy fun with.

Oh sure, it can get ugly too. Kiddy boxing with equally matched opponents. But for the most part they simply get the biggest kick out of eachother.

I'd been so worried about them retaining an individual identity. No sweat there. They each have their own - warped - sense of fashion. ANd even when they DO elect to wear the same outfit at the same time - or I decide for them out of lack of creativity that morning - well, they wear them very differently.

So that they are NOT clones of eachother.

Just brothers who are lucky enough to be the same age.

And now that they're four, I get to be special too. I'm a mother who survived the baby years with twins. I am WAY more laid back than mothers with only one child. I've nursed two. I've changed two. I've fed two. Bathed two. Carried two. Up stairs. With the groceries.

Honestly, you live through that.....you've earned the privilege to enjoy them a bit now too!
Posted by Twintensity at 1:23 PM