It's Called A Tan Line! 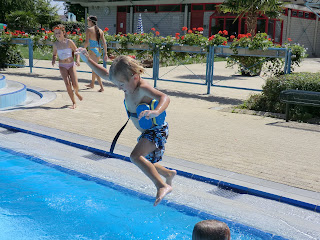 I am not making this stuff up.

We see so little sun around here that the people have become afraid of it.

I took Ryan's friend, Celin, with us to the pool last Friday. The temperature had managed to reach into the seventies (Fahrenheit) and every now and then the sun even deigned to peak his head out through the clouds.

My kids stripped to their bathing suits and headed for the water.

Celin carefully chose a spot in the shade and proceeede to apply sunscreen.

SUNSCREEN?!!! My child, we hadn't seen the sun in THREE WEEKS! And it was a partially cloudy 80 degrees F. Honestly, at some point, humans (and guinea pig and chimpanzees) NEED Vitamin D. Really. These three species don't manufacture it themselves.

"But look" Celin said, pulling down her strap. I still have a line from the last time you brought me to the pool." (Three weeks ago, for the record.)

TOO MUCH SUN? HERE? THIS SUMMER? Honey, that's called a tan line.

Although, come to think of it, they probably DON'T have a German word for it. 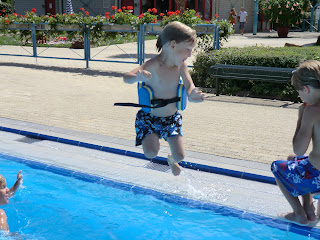 Andrew's friend Marlon's mom called me a while back too. Appeared she was concerned about all the sun they were getting at soccer camp. (It rained two out of three days, so hard that they ended up inside watching "Die Wilde Kerle" a German youth soccer series.) The third day Marlon apparently came home with a SUNBURN.

"A sunburn?" I asked. It was hard to believe.

"Oh yes. It was gone the next day but it was there when he came home all right."

You thought the Scandinavians were that pale genetically?

Let me introduce you to something the rest of the world calls a nice, healthy tan.

Start with a sprinkling of sunshine.

Stick to applying the sunscreen and pretending you have something to worry about! 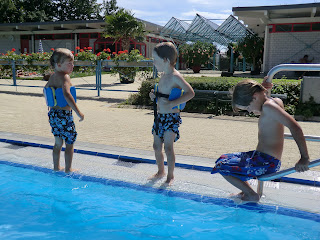 Posted by Twintensity at 3:12 AM