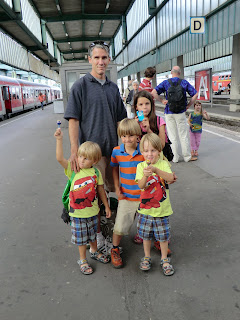 (Written August 12, but left out to cool before posting!)

I'm sorry, but we still don't get it.

I AM speaking for MOST, if not ALL women everywhere. (I can see a hunter-gather woman yelling at her husband. "Honestly, can't you let the blood drain out in the field? Do I have to do EVERYTHING around here! Now I have to go back out with it - asking Anita to help me since it's a large doe - and do it myself. Might as well just go and hunt it myself too.")

We had some folks over the other week to celebrate Damon's new Australian citizenship. Surprise party and everything. Complete with Australian wine, South African wine, Califorian wine and German wine. Our friends know what we like! (In retrospect, the wine list reflected the guest list.)

11 kids total. But they played well. (Or at least we think they did. We were busy taking care of the wine!)

It was nice for Damon to have some guy pals around to back him up against me and my lady friends.

"We just don't like to be told what to do," they all said.

Which I believe we ladies all related to.

But what I still don't get, and Damon can't explain, is why it doesn't get done until he's been suggested at, asked, prompted, reminded, discussed over with, finally told and then screamed and yelled at.

Why DOESN'T "it" get done until we ARE, admittedly, throwing a crazy, hysterical hissy fit complete with tears, threats and sometimes copius amounts of medication (see wine list above) afterwards? WHY do I have to turn into a crazy person for it to get done?

We finally got rid of our couch yesterday. The brief, but fiery, argument beforehand most likely helped fuel Damon's energy in ripping the thing apart and taking it to the dump. Then he cleaned the VW we are posting to sell this week. AND he began to clear his stuff out of the room upstairs. All of which I had been all but begging him to do for WEEKS now. (I would try begging but I think he would see through that.)

I'm NOT angry. I'm a little resigned to the fact that this is just the way it is going to work. I ask for weeks until I can't stand it and blow up. He gets angry, does more than I ask. It gets done. We both get over it.

Except I've got a list of about five other things I've been asking him to look into for a few weeks. Things that are still on the nagging stage, but not fully into crazy, angry woman will make me do it stage.

But I hate that I HAVE to turn into a crazy woman for him to take his list seriously.

I KNOW he's got other stuff to do. Little things like earning an income, settling bills (which I am SO doing again once we move), applying for jobs, and dealing with bureacracies on three continents.

But he's doing them on the bed upstairs, with a cup of coffee in his hand, and his other arm supporting his head on the pillow as he hosts a professional meeting between two other people - presumably in the same position on their ends - from India and Belgium.

Which makes me see where the differences lie.

Hunter brings home meal. Vital. Hard work. Job done. (And admittedly, this is NOT Damon's attitude at all - nor that of many close male friends of mine, but one I do see very often in other husbands. "I earned the money....you do the rest.")

(That last paragraph is going to get me into lots of trouble, isn't it? But I really am TRYING to see the other viewpoint. I was a practicing veterinarian too. I was BEAT when I came home from work. Clients suck. Please DO comment and make me understand it. You know, the boss is on your case, your coworker makes you do all the work, the other one is out on maternity leave AGAIN and the part-timers, mostly mothers, always leave their work for you to finish up and correct. THEN you have to come home, to a wife who has been eating bon-bons on the sofa all day, and help her feed, bathe and put three kids to bed. And walk the dog. Doesn't she do ANYTHING all day?!)

But I'm talking about an office job here. I had one of those too briefly. Sorry, piece of cake compared to a veterinary practice OR staying home with the kids. Quiet. Desk. And....in Damon's case....working from home.

Must be nice to be able to casually finish up the conversation, put down the coffee mug and stretch the second hand behind your head, satisfied of a job completed and well done, while still in your running pants and T-shirt.

So that when I come upstairs, also in sweaty running pants and T-shirt but not feeling quite so good about it, and he casually asks me HOW I would like him to tear apart the couch, my entire body twitches. HOW TO TEAR APART THE FRIGGIN' COUCH? AFTER WEEKS AND WEEKS AND WEEKS? I HONESTLY DON"T GIVE A RATS TAIL HOW JUST GET IT THE HELL OUT OF HERE.

And he doesn't get why I am foaming at the mouth.

Maybe because he assumes the homey smell wafting from the kitchen means that an hour of baking cupcakes with two four year olds should have me feeling at peace with the world. You know, flour on the face, two kids learning how to measure, pour and stir. Maternal bliss.

Because he's been on the phone with India and Belgium and hasn't heard the milk and flour sloshing on the floor from Aidan and Matthew's athletic stirring technique, or me wrestling the measuring cups away from one to give the other a turn, or trying to keep the uncooked batter out of their bellies....mostly to keep their hands out of the uncooked batter.

He sees the painted backs and bellies - lions this week - and the African jungle cutouts painted the color of the German flag and thinks all is right with the world. I even took picture of the paper pizzas we made to learn fractions with Ryan and Andrew to PROVE and DOCUMENT how right it is with the world.

And it IS right with the world.

It's just scary to know that I NEED help with this move this time. I CANNOT physically continue certain steps until he clears out his stuff, or helps me remove that piece of furniture. We NEED to GET STUFF OUT for me to pack what's left.

Don't get me wrong. Damon is an awesome father, friend and husband in other ways. Can't ask for a better dad for the kids or a better friend for me.

Once I lose it, once he sees I am finished and gone, he takes over the kids while I recover.

And he gets to feel really good that he's helping me out.

I just can't see how to get him to do it BEFORE I lose it, so that I don't HAVE to be finished and done.

"You just need to ask politely."

I'm going to just go with the fact that this is the way it is. That men and women are wired differently. That this is what makes the whole crazy having kids and passing on genes thing work.

Honestly, sperm, eggs...pregnancy, CHILDBIRTH. LIVING TOGETHER as man and wife and raising a family? How weird is all that?

Convincing argument that He is a man after all!
Posted by Twintensity at 2:23 AM