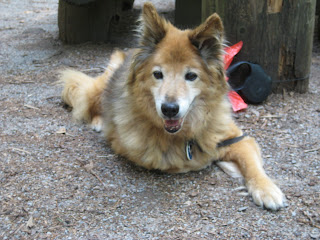 Catch your attention, I hope? Now I just gotta translate it into German and post it up around the area. With an endearing photo.

Wolfy. We still got Wolfy. Fourteen years AFTER I told my friend Kevin, a missionary in Haiti, that I ABSOLUTELY, UNDER NO CONDITIONS, needed or wanted a dog, that dog is still with us.

He has lived in Haiti, Connecticut, Arizona, France and Germany. Seen the Atlantic and Pacific shores of the USA and vacationed all over Europe.

And now spends his days lying on the sofa and fending off hugs and kisses from the four-year-olds. 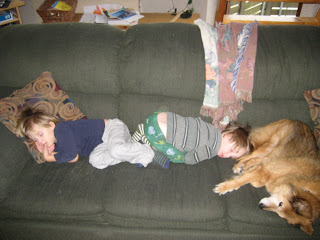 His favorite pasttime is breakfast.

Deafness agrees with him, as he is able to ignore just about anything. Including a family of six coming in the door and making dinner while the kids jump on the sofa.

We had a bad spell about four years ago, when the twins were born. In addition to two newborns, a four-year-old and a six-year-old, I was also chasing after an incontinent dog. The vet thought it might be stress. You think?

Wish MY doctors cared as much about MY levels of stress at the time!

Anyhow, he had Cushing's Disease - and still does. An overfunctioning of the adrenal glands, two small organs above the kidneys most people don't even know we have. He does well with one daily tablet of medication. 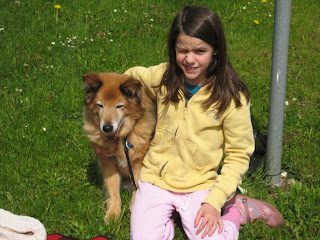 That someone needs to put forcibly in his throat since he won't take it any other way. The pills cost over 2 Euros a pop so you don't want to find them on the floor later, peanut butter licked off, pill neatly spat out.

Other than that he likes to be in the loop, and part of the family, but can't walk very fast or very far. We take him to the Biergartens with us. It's nice since he doesn't react to other dogs (doesn't hear them barking) and is good with kids. (We had TWENTY over for playgroup yesterday and they LOVED him!) 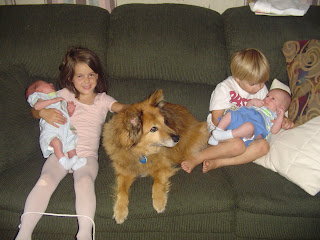 So yeah...we are looking for a home, permanent or temporary, for a very loveable Opa.

We would risk the flight and 30 day quarantine in Australia if someone will take him for the three to four months from November through February.

(Something came up with a Rabies Neutralizing Antibody Titer Test a few days ago, something we thought we didn't need because of quarantine but which it turns out he DOES need IN ADDITION to quarantine. We can have the test done and bring him with us, but he needs to spend at least two, and up to five, months in Germany after the test. If he spends five here, he only needs one month of quarantine on our end. Which is why he needs a home. We leave in November. If he came with us it would be four months quarantine even if we get the test done now.) 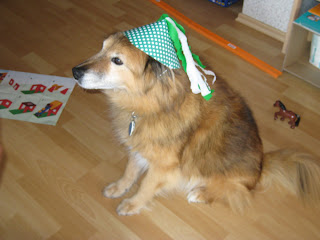 A permament home here would obviously be the best solution, but we realize it is hard to ask someone to take on an older pet on medications. Even a loveable one.

He would be a wonderful companion for someone who would just like a sweet, quiet, canine presence at home. Someone to sit with in the evenings. Someone to follow you into the kitchen looking up at you with adoration- for a slice of whatever you are putting on your sandwich. Someone who will gladly come with you in the car if you like but doesn't demand a lot of activity. Someone you have to force off the sofa to go for his evening walk. And someone you really can take anywhere.

Someone to love as we do. 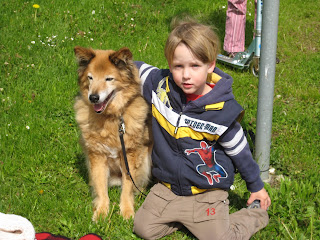 Then again, he is great with kids. Just kind of toddles along behind them waiting for a piece of pretzel to fall his way. Puts up with the ear and tail tugging with a look of martyrdom on his face. He's been through our four, including twins...so it's really going to take a lot to faze him! 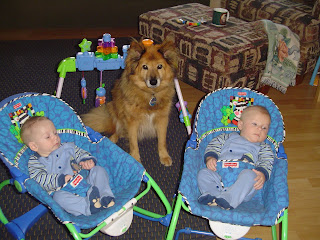 Shy, gentle Opa looking for a retirement home. Any takers?
Posted by Twintensity at 1:50 AM