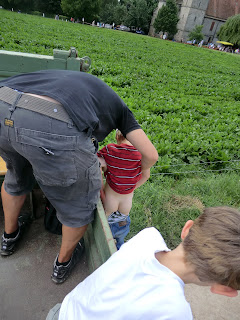 No really. This isn't about swear words.

It isn't about getting on a half hour hay ride after an hour of waiting in line and then having your four-year-old announce he has to go peepee. (Not ours. Although German daddy did exactly what ran through my mind when his kid made the announcement!)

This is about cleaning the bathroom for guests. (Because with two four-year-old boys you DO want to clean up before your friends with two and three year olds come over.)

This is about cleaning up the bathroom for guests and then finding one of those guests on her hands and knees in front of the toilet wiping up the suspicious-looking liquid from the floor, toilet seat, walls and....well, anything in reach.

Lori had offered to clean my toilet for me when I was nine months pregnant with the twins (that and Erika offering to donate her AND her husband's blood when my platelet count was dropping are still two of the nicest things people have ever offered to do for me) but it still wasn't gratifying to actually have her do it four years later.

"What the heck happened here?" I asked.

There was a step stool pulled over to the toilet, 7 boys in the house, 4 of them under the age of four, and so anything was possible.

Oh well. The floor HAD been clean only two hours before.

It got better the following week when I was picking up the boys' room in preparation for Damon's surprise party. 11 kids expected. And some parents. I was still picking things up off the floor when Anita arrived and followed me in. Unfortunately, she and I were having such a good time talking that I forgot to pick up that suspicious little brown thing on the carpet next to the boys' mattress.

"Oh, what is that?" I asked, not at all embarrassed by now. After all, I'd already had Lori cleaning up my bathroom the week before.

About twenty minutes later her 3 year old daughter, Hannah, came out to join us on the balcony. She was accompanied by a rather strong smell. A trail of dark brown footprints followed her from the boys' room to the balcony.

Oh. I suddenly remembered what I'd forgotten to pick up.

Pour everyone some more wine and begin next to the bed with cleanup. The kids found it fascinating.

The kids couldn't believe noone was getting in trouble.

The adults continued to enjoy themselves out on the balcony.

Reminding me, yet again, that it isn't about perfection.

It's about how you deal with imperfection.

Reminding me, too, that I don't need a perfect house in order to invite friends over.

Heck, it only takes one errant stream of urine to turn my clean bathroom into a flood zone anyway.

I believe it was Erma Bombeck who said, "cleaning the house while you have children in it is like shovelling the driveway while it's still snowing."

If only it were that pretty!
Posted by Twintensity at 1:14 AM