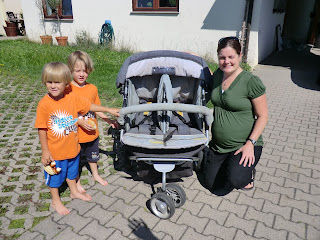 I'll be the first to admit we were annoyed at how little the bed sold for on Ebay.

It's like everyone is expecting us to give this stuff away for free.

And we DO need to get rid of it, but honestly, is noone thinking about how much money we are going to need to finance a move to Australia?

Answer: No. Certainly not on Ebay. Where they don't know us and where the name of the game is, fair and square, to try and bid at the last second and get it for as little as possible.

And then we meet the families and are thrilled to be able to help someone else with young children, or a new baby (or two!) on the way. We end up throwing extra stuff in the car as they pull away. Especially people from the American military base.

"Hey. Can you use this rug? Not sure? Well, lookie here, it fits right in your trunk next to the naked Barbie dolls and plastic pistols I threw in. Don't worry, if you don't like it when you get home, just chuck it in the dumpster on base."

So that it really IS working both ways.

Sure, we were hoping to get a bit more for some of the stuff. But only because everyone else kept telling us to ask for it. Truth is, people want bargains. And we need to get it off our hands. So that helping others - and working on generosity as a state of mind - is making up for the difference in price.

Take the Ebay buyers. We'd been selling most things through the American military base. It's a mobile culture. Folks are friendly. And we figured we'd be dealing with less haggling. (And it has been so much fun to reconnect with the Americans; my goodness, we know all about you people within two minutes of meeting you!)

And then the Swabians came for the bed. For their five year old daughter. Who was so thrilled to be able to have the same one (Lo series bunkbed, white) as her younger brother. Because they were a little tight on cash since the third baby came. Aw.

And the cutest little German/Italian couple, pregnant with their first child, glowing and proud, a little shy at our exuberance, but oh so darling as they start their family.

The Schwabs gave us a bottle of Sekt (champagne) as a thank-you gift. The Italians gave us oil and vinegar from Sardinia. Yesterday someone brought small presents for the kids. We have yet to meet a German at the door who isn't carrying a small token of their thanks - for BUYING our stuff.

HOW NICE IS THAT?!

It honestly isn't about the gifts themselves at all. Although we were dancing for joy in the kitchen at the smell of the authentic oil and vinegar.

Someone else was grateful. For something we did for them.

And they thought of us.

I am trying to let go of the fear; the fear of not having enough. I am thrilled to be living with less. And I am happy to be helping others.

So that, while we do try to get a little something for the larger pieces, I am also happy to give as much as I can away to friends. And strangers.

Selling our car reminded me of when we bought one from a soldier on base over four years ago. We were the first to see the ad, drive it, and offered to buy it on the spot. (It's all luck and timing.) Hand-shake deal til registration opened on Monday. On Monday the owner informed us that he had been offered $500 more over the weekend than the $2000 he had advertised. And still sold it to us for the $2000. Because of a handshake and a sense of fairness. (Another guy gave us our money back on the first truck we bought because the truck broke down in the first week.)

We had to sell our new car within a month when we found out baby four was following a little earlier than planned - 12 minutes after baby number three - but that was easy too. I'm telling you, if you want fair, deal with the soldiers on base. (I'm not always a big fan of the U.S GOVERNMENT and I absolutely CANNOT work with the military bureaucracy - as if that surprises any of you who know me - but it did surprise me at how much I like, REALLY LIKE, the individual soldiers and families I have met here. I'm a hippy by nature. So far to the left that I have swung around to connect with the right, as I like to say!)

This weekend we are honoring a same handshake agreement until Monday. What goes around comes around. And vice versa. Maybe this is why good things happen to good people. If not karma, a sense of peace knowing you are doing what is right.

And, let's face it, we are paid in other ways as well. Our twin stroller is going to a lovely young lady pregnant with her first TWO children. She also bought the Baby Bjorn style baby carriers, complete with comedy video on how to use them. Even after seeing the photo of me TRYING to use them.

I made her pose with Aidan and Matthew - and the stroller - before we put it in the trunk.

No amount of money is as valuable as being able to say good-bye to a part of your life - and know it is going on to enrich the lives of someone else.
Posted by Twintensity at 10:51 AM