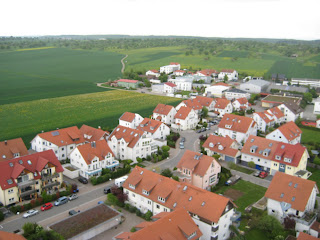 The problems aren't at all what you'd imagine.

It was easy to get rid of the sandbox. "We can't take all that sand with us on the airplane, now can we?" I reasoned.

"Where are we going?" they asked.

"In Australia!" they chimed back.

The spiders are an issue. We taught Andrew about the pressure wrap and practiced dialing "000" but he's still leary. Snakes too.

Aidan was just in hysterics over the small, German spider that he found on his leg. No amount of reasoning and looking at it under the insect scope was going to reassure him.

In retrospect, also not good things to be teaching him when the bite of the funnel spider in Sydney can kill you in under four hours. ("C'mon mates" they reassure you in the tourist books "you've got FOUR HOURS to get to a hospital.)

It's become a bit of a family motto in the last year.

"What about all those sharks and jelly fish?" the other parents from Andrew's class asked us around the campfire on Friday. The box jelly CAN kill you quickly. Mostly because the paralysis - and sheer pain - causes you to drown.

"Shhh. We haven't told them about those yet." I replied.

We like swimming. And it's going to stay that way.

Aidan would like a bicycle. I believe they have those there too. Andrew wants an Ipod. Switching continents isn't going to stop them from growing up.

Ryan just wants a Brumby. (Any horse will do though.)

We've discovered American military families are happy to relieve us of our possessions. The rest can go to the Red Cross.

So that it's really all a lot easier than you'd think.

I'm not saying it's as easy as throwing on a pack-bag with flashlight, sunscreen, bugspray, water and a change of underwear and heading off for the weekend on your bicycle as a Peace Corps volunteer in Haiti.

Then again - sounds like the sunscreen and bugspray will come in handy in Australia too!

And honestly - the important things don't fit in a suitcase anyway!
Posted by Twintensity at 6:17 AM