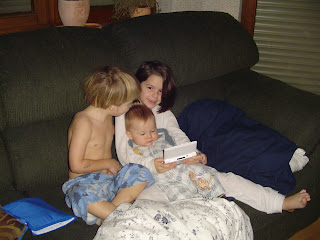 Ryan got her cell phone the other day.

It's a really old model, about twice the width and length of what most of us are carrying around nowadays; kind of like watching a rerun of an 80s sitcom and noticing these really huge phones the characters so proudly pull out of their handbags. Ryan's phone is 5 years old; Damon and I used the dual set when we first came to Germany, before we had a permanent place of residence and a home phone number. (I know, I know, those are terribly old-fashioned too; turns out I'm an old-fashioned girl after-all, in regards to technology if not to ideas.)

It was a big deal - for me and Damon anyway. The day before, Damon went out and got a third (fourth if you include the home phone) number for the family, a prepaid phone card, and instructions on the whole deal. Can you imagine the amount of phone numbers that will be attached to my family of six within a few years? I'm assuming we'll get rid of the home number at some point, but by then we'll NEED tattoos to remember which phone number goes with which kid.

It reminds me of a twin scene from Harry Potter, an exchange between the Weasley twins, Fred and George, and their mother. "Honestly Mom, can't you even tell us apart?" they tease. I imagine calling for Aidan. "Hello, Aidan?" "Honestly Mom, can't you even keep the phone numbers straight? This is Andrew...and I'm not even one of the twins." "Oh, yeah, well, sorry then, my mistake." (Befuddled, looking askance at the phone, kind of scared to just start pushing buttons, still not really sure WHERE the address book function is found.) "Would you mind sending a quick SMS to your brother, reminding him to pick up some pizza on the way home?"

Turns out you can program numbers into an address file. This means you don't ever have to remember them. Although what happens when you lose the phone - or lose power, world-wide, forever, which I still fear can happen, much the same way I still don't trust power windows because what happens if the car DOES carreen off a bridge and into the water, and the electricity goes and you can't open the doors and you need to unroll the windows by hand to get all four children to safety?

You can see how I am never going to buy completely into this technology thing. I trust my hands; my actual physical being. I find it hard to trust something invisible - and at times unreliable.

So Damon and I spent the evening going over the cell phone. When I asked him to write Ryan's number down on a sheet of paper, you know, something I can tear off the grocery list and hang, tattered and torn, from the corkboard...he had the nerve to turn around and take Ryan's picture, before saving it - and the number - in the address book on my phone. Just like Troy and Gabriella. I didn't even know my phone could take pictures! Here I am thinking we're too poor to own the technology everyone else seems to have and it turns out I've had it all along. I'm just too lazy to learn how to use it. Or too stubborn to admit it exists.

I was really concerned the following morning as Damon taught Ryan to use this new technology. I mean, she had to know how to turn it on, how to find the number, how to dial......and turning it on is really really really hard. You know, you have to push the button for a really really really long time before it works. And then those endless function lists - I know I certainly don't know what they're all there for. And finding our number in the address book? She hasn't even taken algebra yet. What were we expecting?

Remember when you used to have to open the child-proof medication bottles for your grandmother when you were a kid? Turns out it's just like that.

Ryan came home after barely a little over 4 hours of owning the phone, the phone having spent most of that time in her schoolbag, off. She not only had figured out the on/off function on her way home, she had dispensed with bothering to phone home and learned instead how to get into the game menu. Game menu? I didn't even know it HAD one of those! She spent the better part of the afternoon playing games on the phone, until she decided it was time to figure out how to get the music working. Music? REALLY? My guess is it takes pictures too. Who knew?

Damon tells me that the new cell phones are coming with built in GPS systems now. This is technology I can appreciate. I swear, I heard some American military mothers the other day wondering how the heck people found their way around Europe before GPS systems. "Google Maps," I ventured to reply. "Mapquest.de?" I was too embarrassed to mention that we still had some maps in paper form. That you could go to AAA and get a detailed route of your voyage, complete with paper maps. Another mom told a story - true - about finding her way around Paris with a paper map. "Yeah, it was unbelievable, I really knew where I was going." she said, a little in awe of her own ability to master this ancient technology.

Now we never have to know where we are going anymore - until the little voice tells us that we've arrived. If only I could remember where the hell it is I want to go. Or does it matter, as long as I can take a picture of it and Twitter to all my friends that I've been there, checked it off, bought the T-shirt.

Ryan got her cell phone the other day.

These kids are dragging me kicking and screaming into the future.

Humor an old lady; please let me bring a paper and pencil along to document the journey.
Posted by Twintensity at 10:48 AM