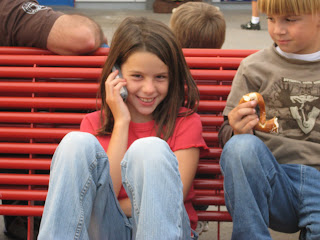 Call them what you like. The USA has cell phones, the British use mobiles and the Germans call them Handys. I just looked, it's telephone portable in French and telefono celular in Spanish.

I see kids texting and playing games with them on public transportation. Disney's "High School Musical", the first movie, has Gabriela and Troy taking eachother's pictures with them before programming in their numbers. This is technology I don't yet get. And if you don't know who Gabriela and Troy are you're in worse trouble than I am. Also I wonder, do girls still give out the wrong number if they don't really like the guy?

With all the hype about the amount of time teenagers nowadays spend online - that they interact more through typing to one another than through actual one-on-one face time - I really wasn't in a rush for my daughter to join the crowd. When she asked me for a Handy two Christmases ago I blew it off as a child's fantasy. MAYBE when she was 12. Or 13. I mean, what does she really need this for?

I'm sorry to say I've been forced to change my mind. And it's not the status quo or peer pressure this time either. It's that damn black Mercedes, popping up in Altdorf again year after year for the past three years. Not sure til now if it was just an urban myth, or suburban housewife overexaggeration, the man has now apparently attempted to physically abduct a young child at the local supermarket in nearby Holzergerlingen. He was thwarted by a grandmother who noticed the child's struggles and went over to help. But he may be the same man who has physically molested - and later released- a child in Stuttgart. And there is another child missing.

Am I hysterical? I don't know. I do know that we left the USA in part because we felt life would be safer for our kids here in Germany. Only to learn that a small boy had been found dead in neighboring Weil in Schonbuch a little over ten years ago. And then the school shooting in Winnenden, 40 minutes away.

To be honest, we have it pretty good. There are no land mines in the neighboring fields. Military planes aren't dropping bombs. There is no invading army at the border, no military dictatorship. We have food, education and freedom.

And now Ryan gets a cell phone. An old one, with no games or camera or texting capabilities and with a 10 Euro pre-pay card. Only to use in case she ends up stranded at school without someone else to walk home with her. (Andrew's crew stays together, but the girls tend to be less reliable.) Between the two evils of cell phone versus walking home alone, I choose the phone. She is to call.

I'm betting my mother will be sending her more pre-paid cards - and her phone number in the USA - within a week.
Posted by Twintensity at 12:11 AM