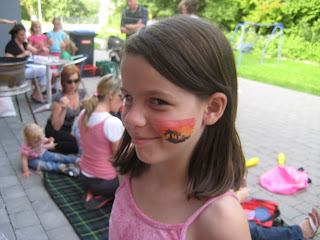 "Life is good." Both kids were wearing new T-shirts and sporting a summer tan when they arrived home last Sunday. Ryan came slowly and shyly through the front door, first up the stairs but pushed aside by Andrew's exuberant sprint. They both were full of stories of family and friends they had met in the USA, on Damon's side dozens of young cousins we hadn't yet met and didn't know to place with which parent. Lucys and Logans, Cole, Ryan, Jade, Jax and "oh yeah, those came from Lily's Grandma." Okay, and Lily is?

They had a world of their own and they were perfectly comfortable in it without us. "What kind of parents are we that we send our kids away for a month and they don't miss us at all?" asked Damon. "Good parents with happy, confident kids." I replied. They were at home without us but then slipped right into home here again too. (I'd been a little worried that the grandeur of the USA would make them see Altdorf for the sleepy little farm village it is, but no, the thrill of society at the local pool and the allure of the village soccer team still held sway.)

Andrew was just the same but I felt like I had to get to know Ryan all over again.

Little did she - or I - know that I had changed too. In subtle ways, but firm ones. You see, it turns out that I have found myself. At least a little piece of me anyway. Without the chaos of four young personalities swirling around me, the constant needs of two young infants and the demands of two older ones, my own personality was beginning to emerge again after a 3 year shock- induced coma. For over over two years after the twins were born, I simply coped and carried on. The kids thrived; I survived.

But now I was beginning to breathe again.

I'd also forgotten what it was like having Ryan around. You see, she's so quiet and unassuming in appearance that you forget the monster will lurking within her seemingly innocent charade. Nine year olds. OH YEAH! Vacation was definitely over.

I couldn't believe she already had my hand imprinted on her left thigh after only 26 hours.

It started innocently enough - my innocence. We were visiting the Bebenhausen cloisters on Monday afternoon when Andrew asked if he could sit in the back of the VW between the twins. (We'd used the smaller car all summer while the older two were gone.) It seems my previous blog on entertaining older children was as true now as before the summer; Andrew wanted to go home and play soccer with his friends and Ryan was just bored and pissed she had been forced to come along. In the meantime, seating arrangements for the car ride home were first priority.

Ryan had already sat in the back seat twice, wedged in with a lapbelt while Andrew rode in the front. Grandpa and Damon had the 7 seater Chrysler to themselves, but it was fun. I liked having all my kids packed in around me like sardines! But it seemed only natural - again to me - that the older two should take turns in the choice back seat between their brothers. Ryan made a big stink, but my word was final. After all, I am the mother here, right?

Half an hour later - we were walking and biking back from the Bebenhausen cloister - Andrew pedalled back in tears to tell me that Ryan had spoken to the twins about the seating arrangement and coerced the two of them into taking her side. So she was sitting in the back and he didn't think that was fair. From innocent summer back into the reality of older children. Wow. But wait, wasn't I the mother here?

Back at the car, I calmly continued to override Ryan's objections. Mostly because I'd forgotten how hard that can be to do. She cried and screamed and physically resisted. And then she sat in the front seat next to me and pouted. Loudly. And I thought, "Wait a minute, I don't feel like dealing with this shit anymore. This is unacceptable." My hand came down on her left thigh in a brief burst of - let's face it, appropriate - anger. And then I calmly but firmly asked her to get out of the car. I opened my car door - and she stopped. Just like that. Either I got really lucky or she could sense that I really was going to let her out of the car. I am sorry - no, I'm not - I just am not dealing with shit like this anymore. (Damon was in front of me, both of us pulling out of the parking lot, so she wouldn't have remained abandoned on the road side for more than a few seconds.)

As a parent, I realize it was only one battle, but I'm hoping to win the war by just refusing to get into it. (Maybe I should direct American foreign policy, but that's another topic.) As a pacifist, I still left a mark on my child's thigh, but I figure anyone with older children will understand the difference. I'm not proud of the mark, but I am proud of the calm that descended on us all when I just refused to fight.

We drove to Weiler Huete - our favorite summer Biergarten - where Ryan spent over an hour pouting next to the car while the rest of us sat outside to eat. But there was no pall over the meal, no lingering unhappiness or sense of doom. We had fun and Ryan was forgotten. She had made HER choice to be miserable and I had made mine not to be dragged down by it. I was remembering that I had no choice in her behavior, but also learning that I had a choice in my response to it.

It is WAY easier said than done. And we're only a week into it today. But I think the key is that I didn't see Ryan standing at the car as an appropriate punishment, something she deserved through her bad attitude or her behavior. It wasn't a need to "show her the consequences of her actions." All of that just seems spiteful to me now, not worthy of a loving parent, just another muscle game of a powerful parent over an essentially powerless child. I wasn't punishing or proving anything; I just refused to go to war.

I get it now. She doesn't want me to rule over her. (I believe they call it democratic parenting, something I don't yet 100% believe in.). This house is NOT a democracy, or even a republic (do you remember the difference from highschool history?!); it is now officially a "kinder, gentler nation." (Tell me I did not just quote Bush Sr. - where the heck is that from?!) Ryan will be Ryan. And Christine will be Christine. Two women in a housefull of men. Like two cats warily circling eachother in a household full of Labradors.

Ryan did eventually join us at the table, smiling and cheerful and all traces of resentment forgotten. A happy ending, but only because my happiness did not depend on it. Ryan is back. So am I. Life IS good.
Posted by Twintensity at 12:26 AM