Sorry, We Broke Your Kid! 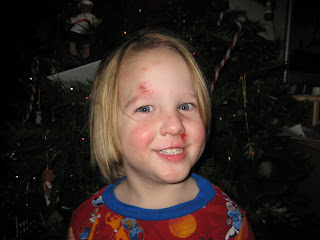 Damon and I broke a kid the other day. No biggie really. Nothing that a Saturday evening trip to the emergency room couldn't fix. Three stitches. He'll be up and walking again - with crutches - within a couple of days.

The only problem being that it wasn't one of our kids we broke. Oops.

I hate returning something I've borrowed in less than perfect condition. Although this isn't as bad as the time I dropped Babette's copy of Amy Tan's "The Opposite of Fate" in the tub while I was reading it. I ordered her another copy through Amazon.de but she preferred the old, now wrinkled version with an interview of the author in the back. So did I.

I dropped Lennart into the tub too - gently - to rinse off the wound and apply pressure after Damon handed him off to me at the top of the steps, blood streaming from the bottom of his foot. Our neighbor, a paramedic, confirmed the verdict - "Yup, stitches." - and then we ALL piled into the car to deliver the news - and Lennart - in person.

Lennart's dad and mom were cool about it; they have an older son too. The more kids you have, the more immune you seem to become to their injuries. My friend Nicki's son , the oldest of 4, came up to us on the playground earlier in the week after falling on a stick - with his EYE. After briefly making sure the eye itself was not injured we proceeded to watch the two small cuts grow into a nasty bruise over the next two hours. "Think of how cool you'll look at school on Monday." we said. Nine years ago I was crying because I'd allowed Ryan to bump her brow on the changing table - first blood. As we added Andrew the rule became "no blood, no foul." Since adding two more it really has to be enough blood to be convincing. "I'm bleeding Mom." "Yeah - how bad? Can you apply pressure to it for a minute? I'm on the phone with a friend right now." The kids know where the band-aids are.

Of course, this wasn't one of MY kids.

And we are all worried about the effects this will have on our soccer team; Lennart is the other goalie for Altdorf. Lennart wondered if he'd get to use crutches for the first day of school on Monday. (Turns out he did, making him the hit of the school for that morning.)

I wondered what the other moms would say when they heard. "Oh Lennart? Yeah, you know they say he cut his foot on a piece of glass playing out back in the creek while he was visiting the Connor's." "It figures." My guess is they'll be wondering what the heck we were doing letting the boys play barefoot in September.

I wonder if I'll be allowed to host any playdates after this.

And I'm wondering what I can do to get out of the bake sales too!
Posted by Twintensity at 5:27 AM