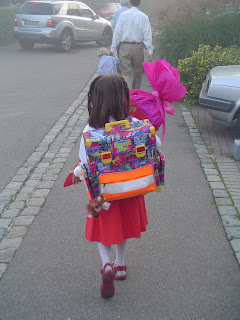 Looks like I am learning and maturing after all.

Sat through two parents' nights this week and managed not to get upset at all. The system can't really bother you if you've already decided to ignore it anyway.

Looks like Andrew's 2nd grade - and others all over Germany - will not only be learning how to write essays but will be perfecting and polishing them as well. They'll also have the multiplication tables completed and memorized. They've squeezed a 13 year curriculum into 12 years recently, allowing kids to graduate in 12th grade like other European countries and the USA but not taking into account that those countries start teaching in kindergarden, essentially making it into a 13 year program. Also not taking into account that other countries spend more hours per day at school. (They myth of the German warm meal at home will be explored in another blog.)

The second graders will also be pushed harder, compared earlier and taught about grading requirements. They have more lectures and fewer field trips since there just isn't enough time to teach all of the material required and have fun too.

It's not half as upsetting to me when I realize that the teachers and parents find it ridiculous too. I've got some rants about the German education system already written but it's nice to know that there are Germans up there willing to fight the system as well. Or at least voice their displeasure.

It's also helpful that Andrew isn't phased by any of this at all; sheer luck there.

And after all the worries about Ryan's math abilities - or lack thereof- it turns out that they've fired last year's math teacher and this year's teacher is appalled by how little the children have retained. Never mind that I find it ridiculous that 3rd graders are taught different subjects by different teachers, it turns out that Ryan's entire class is behind enough to allow us to have our primary teacher for German, Math AND English. What a relief! Ryan is happier in school, does her homework FAIRLY well and actually seems to understand what it is all about this year.

No grades yet, but that's not the point. She actually appears to be a fair student this year! I was about to have her tested for a learning disorder and it turns out it might have just been a bad teacher. Really amazing what a difference that makes especially in a country where one year lost - third grade - could make the difference between university or trade school.

Ryan's not a perfect student - I was embarrassed to raise my hand to ask what the heck the Reading Tree was since my daughter hasn't mentioned it, or as it turns out, participated either. ""It's a competition, Mom." she explained. "And I don't really need that." Okay - I like the attitude.

I also asked her teacher to ASSIGN the multiplication tables as homework again - since NONE of the kids seem to know them. Ryan memorized the 3s and 4s today. Two years too late is not too late. The curriculum has been whizzing by so fast the past two years that it is nice to finally slow down and LEARN something.

And it appears that I am learning something too - to keep my mouth shut and not always fight for generalities. When the teacher reconfirmed the school's no cell phone policy, I was tempted to question her about it. Does it apply to cell phones that are hidden and turned off during the day? Is it fair to expect parents NOT to send their child with a phone when the school can't assure that a child won't be left to walk home alone? Yada yada yada.

Have I given up fighting for what is right? I think maybe I have. I'd still like to see less stress on the kids, especially in the first six grades. I'd like longer school days incorporating lunch and allowing teachers to teach and children to learn in school and not at home. I'd like them to stop sorting the kids so early, to stop trying to treat everyone the same by forcing them to learn at the same pace. I'd like more money for more teachers. But I'm a protester now, not a fighter.

And I can slip the cell phone into my daughter's schoolbag without making a public debate out of it.

Guess I AM adapting to new technology after all!
Posted by Twintensity at 8:46 AM