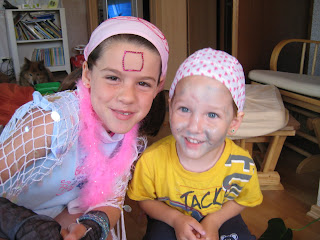 Billy Joel's song keeps going around and around in my head. "Pressure." Just like we played it over and over again the first year of college.

"But you will come to a place
Where the only thing you feel
Are loaded guns in your face
And you'll have to deal with
Pressure."

But who would have thought that that place was your children's first day back to elementary school after summer break?

Honestly, these people are nuts.

I announced my new "no stress, no pressure" policy while walking over to the church for the traditional start of the school year mass. The other mom looked at me like I was crazy. But had I noticed that the teacher had left something off the list of things we needed to buy? She was sure we'd need a large cover for the large German notebook. She was getting it this morning. Would I like her to pick me one up as well. "No," I said. "If the teacher finds it important she'll let us know." In the meantime I figured Andrew was able to write in the notebook even if it was missing the proper cover. "But everyone knows that German is red, and it's always been that way and....." she went on.

Later she worried that she had let her son label his notebooks himself this year. Last year she had typed his name onto tags and stuck the tags on herself. On one hand, she figured, the children ought to be encouraged to do these things on their own. On the other hand, she worried, he had very messy handwriting and was still having trouble with the X in his name and she wasn't sure how damaging it was for him to see those messy notebooks day after day.

I am not making this stuff up.

But it's more than a penchant for neatness; it's the necessity of placing everything in it's proper place, of putting everything in order, of following certain rules. It's called the status quo and we have it in suburban households everywhere. But it's a damaging part of the German character. Germans may not like the rules, but they will follow them. Right down to that proper notebook cover in second grade.

Even though I felt it was all ridiculous, and have vowed not to take part in it this year (or ever again), I still felt the pressure. Later, when a friend asked me what I was planning to cook for lunch this afternoon, I honestly answered that I wasn't sure yet. (It was 9 AM.) She didn't understand. "No, I mean today's lunch. What are you cooking?" When I mischievously replied that I might just let the kids eat cold sandwiches, the way we did in the USA, I swear THREE mothers turned around to look at me in disbelief. They think I'm making this stuff up.

Not to care what other people think - it really is dangerously liberating.
Posted by Twintensity at 4:43 AM